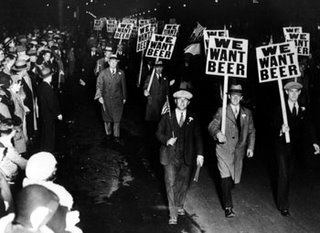 If your reading this, you already know that Utah Beers are great and that we produce some top- notch suds here behind the zion curtain. That being said, a study released by the National Beer Wholesalers Association and The Beer Institute say, Utah generates three-quarters of a billion dollars each year and provides jobs for 10,670 Utahns, directly or indirectly. It also generates $255 million annually in wages and benefits. There's no doubt about Beer is big in Utah. And it's safe to say that the state's economy would be delt a huge blow if the suds would ever cease to flow. (Hey, I made a ryme)
How the institute came by those numbers can be traced to its Web site, beerservesamerica.org. Although officials at the Utah Department of Alcoholic Beverage Commission - which regulates and enforces Utah's liquor laws - could not confirm the institute's numbers, they do estimate that the state has collected nearly $12.5 million in beer excise taxes this year alone. I'm personally responsible for approx. $3.2 million of that(don't tell my wife).
Posted by Mikey at 12:50 PM 2 comments:

I'm back. After a four-month-long summer hiatus Utah Beer is back! Depending on your point of view that either good or bad(mostley bad). I don't know if it's the impending Great American Beer Festival, or that i've only been at work for an hour and a half and I already need a beer(probibly the latter). But I was drawn to you. Like a... ahh... yeast critters to sugar(like you could have done better).
Yet, I degress.
One nice thing about taking the summer off, is that it has provided a fat cache of topics for me to spew forth to the thirsty and beer impaired. And also to give those who just 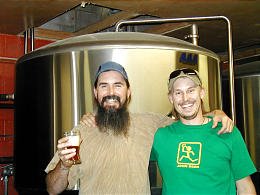 need a little sumpin-sumpin to help get they're lips smackin'.
One note worthy event over the summer was the opening of Zion Canyon Brewing Company. ZCBC is located just outside of Zion National Park in Springdale, Ut. It opened last june and fetures four handcrafted full grain beer styles. An Amber Ale, an IPA, an ESB and a Jamaican Style Lager. ZCBC will be offering other styles in the future, including seasonal beers.
All four labels will be bottled and distributed throughout Southern Utah, and all four will be available on tap in the ZCBC pub. They'll also be kegging their Springdale Amber Ale and hopfully they'll get it distributed up north so we can more easily sample it. Zion Canyon Brewing Company is a 2,500-barrel/year operation owned and operated by Dale and Derek Harris. The brothers grew up in nearby Rockville, and for years have planned to open a microbrewery in Zion Canyon.
-photo courtesy Deseret Morning News
Posted by Mikey at 9:24 AM No comments: