Attention ladies, The Utah chapter of Barley's Angels is having a special chocolate & beer pairing at the Beerhive on Thursday, February, 7th at 7pm. The pairing will feature beers from Epic Brewing with chocolates provided by MillCreek Cacao Roasters.

This event is for ladies only! No tripods allowed, got it Sanchez? The cost is $10 and you must RSVP.

And a reminder that the Salt Lake debut of Unsacred beers will be tonight at 5pm.
Bar X, Poplar Street Pub, Beerhive & Piper Down.

Today residents of of the Ogden area will be the first to get their hands on Utah's newest beer brand. Unsacred Beers will debut this evening at 5pm at Boston's, Rainbow Saloon, Slackwater Pizza & Brewski's. 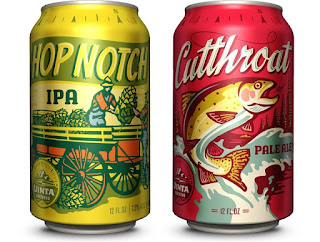 Here are some mock-ups of a couple of Uinta's new cans. Thoughts?
Posted by Mikey at 7:39 AM 9 comments: 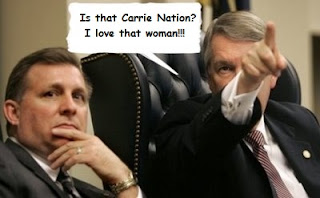 Today begins the annual forty day clusterfuck known as the The Utah Legislative Session. For our purposes this is the beginning of the process where the uber righteous convene to take away many of the freedoms that you as normal adults enjoy in your pursuit of artfully crafted beverages.

Keep checking back for updates on the pending alcohol legislation. And for fuck sake make you voices heard! 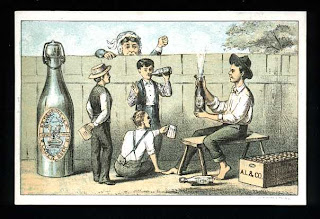 As you've probably noticed there hasn't been much action happening on the beer front lately. Luckily we still have New Beer Friday!

Bohemian Kleinbock: you may have noticed that there has been a bit of a Renaissance at the Bohemian Brewery lately. Seasonal beer have been hitting the taps like crazy, their latest offering is called Kleinbock.  Bock beers are rich malty beers traditionally stronger in alcohol and brewed during winter and spring.  Bohemians Kleinbock, or wee bock, tries to capture the fantastic character of these beers but stay within Utah’s draft laws.  It pours a bright, deep golden color with a nice white head.  It has smooth bready malt sweetness with a clean finish and balanced hop flavor but minimal aroma.  Available exclusively at the Bohemian Brewery.

RedRock Chili Porter: I have not had this one yet but here's one readers description. The spice and chocolate balance each other out perfectly. Chocolate first followed by spice.

Ovila Belgian Style Golden: The nose is full of biscuit malt, with a dose of Belgian yeast and citrus with a little bit of cinnamon and coriander. The flavor has a lot of malt and yeast character, as well as some sugar, lemons and oranges. The alcohol is noticeable but the beer is still easy to drink.

Sierra Nevada Tumbler:  Heavily roasted with a hint of the campfire charcoal, the nutty blend is sweet and slightly dark at the same time.

Sierra Nevada Ruthless Rye: The nose is earthy and malty with piney resins. The flavor starts piney with a complex grainy malt character. Next comes hints of cocoa and a mild rye spiciness. The finish is dry and piney. This is very much like a spicy SN Celebration in that it’s got good hop character, its solidly built and very dense for the 6.6% ABV. Very clean and balanced.

Even though it's nine months away it's time to start thinking about getting your home brew ready for the 5th Annual Beehive Brew-Off. This year's competition will be held Saturday, August 17 and Sunday, August 18 with awards given out around 5pm on the 18th.

Competition is fierce, it will likely take all of the allotted time to hone your recipes. From my personal observations at the judges table, while creativity drives the competition it's technical prowess that get the awards. More info as the comp gets closer.

There's a new brewing company coming to Utah soon... Very soon - actually in a couple of weeks. Unsacred Brewing's owners wish to remain behind the curtain for the time being, because they are about to commit an act they swore they'd never do, make 4% beer.

"We are committing a sin against ourselves by creating Utah’s newest line of 3.2 percent beer,"quipped one anonymous owner. "But Utah’s laws have made it difficult for us to be true to our original intentions."

If you read between the lines you'll have no problem figuring out who the culprits are. This new line of beers will have light-hearted themes, that promises to poke fun Utah's ultra conservative - anti-adult machine.

Later this month the brewery will release four beers to consumers, three of which have tongue in cheek themes that Utah's beer lovers have come to know and love. Priesthood Pale Ale, The Vision Lager and Unfaithful IPA. Unsacred also will offer Rimando’s Wit, named after Reâl Salt Lake Goalkeeper Nick Rimando. Priesthood Pale Ale will be a traditional pale ale with a spicy hop profile. The Vision Lager will be a light, sessionable, American-style lager with a clean, crisp, pilsner malt finish, and Unfaithful IPA will be a hoppy India pale ale. Finally, Rimando’s Wit will use a special Wit strain of yeast along with bitter and sweet orange peel, grains of paradise and ginger.

If you live in Northern Utah there will be events and draft parties all over Ogden on January 30. Similar events in Salt Lake will take place the next day on January 31st.  Bottles will be available in grocery stores by late February or early March. Golden Beverage Company from Ogden will be the distributor for Unsacred Brewing in Northern Utah.

I for one am happy for the new 4% additions. I love flavorful session beers! We'll keep you in the loop as to what the events are the closer we get to debut time or you can check out Unsacred's Facebook Page. 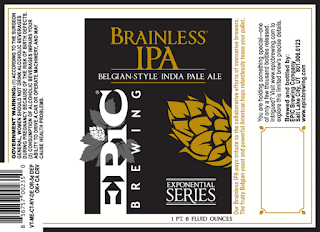 Just one beer on this snowy Friday and it's big, spicy and hoppy. The newest addition to Epic's Brainless portfolio of beers is an American Belgo-IPA called Brainless IPA.

This IPA uses Belgian yeast for additional spicy and fruity esters. The base flavor profile is described as being full of pineapple and tart fruit with an emphasis on citrus & spices that lingers on the tongue.

This isn't the only addition to the Brainless Series, Brainless on Raspberries will also be coming our way in 2013. Brainless IPA is on sale today at the brewery & will be showing up at your favorite Epic watering hole in the coming days. 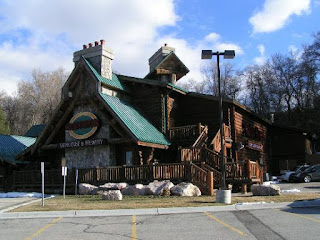 Ruby River has new owners! The restaurant/brewery located in Riverdale, Provo, Sandy, Salt Lake & Reno, NV has been a part of the Sizzling Platter family of restaurants which also include Hoppers, Red Robin & Sizzler since the late 90s. Sadly for most of it's history, Ruby River's brewing operation has always taken backseat to their restaurant side, their owners really never embraced it or gave them a chance to spread their wings and grow. That is about to change.

Recently, the Ruby River chain was purchased from Sizzling Platter and the new owner appear to have a set  different priorities. Rob Bunn RR's head brewer says, he expects a lot of support and a lot more emphasis on their hand crafted beers from the new owners. RR is currently being distributed by Golden Beverage to some local spots in the Ogden area and Rob adds that, they are going to be focusing on their staple beers as well as developing some tasty new seasonal offerings and organizing some special events for the brewery.

It's about damn time that Rob & Ruby River will get a fresh start and a chance to expand their brand. Best of luck!

Also, It's City Weekly's "Best of" time again. If you find this blog helpful please vote for it under best local blog. Thanks! 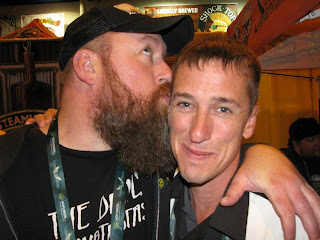 Squatters is pouring a special, one of kind ale this week that's two parts Utah, one part Washington & one part French . Squatters' Jason Stock & the Utah Brewers Coop's David McKean have teamed up with with Washington State University to create a unique pale ale, made from an entirely new hop strain developed by WSU.

Pours a hazy amber (just like Full Suspension). The nose is fruity with some berries and citrus. Starts with a good grainy malt presence, hops are floral, grassy & earthy. The finish has hints of berries. Very drinkable, has no hints of it's Full Suspension beginnings.

It's an interesting hop strain. I hope they have an opportunity to experiment with some others soon. French Connection is on tap right now at Squatters.

Cheers!
Above: Jason Stock - David McKean
Posted by Mikey at 5:01 AM 1 comment:

I'm not sure how I missed these guys, but there's a new Cider House/Meadery in Cache Valley that's part of Slide Ridge Honey Farms. CaCysir Honey Wine. (pronounced ka--SIGH-sir) CaCysir is a 100% local blend of juices from seven select Northern Utah apple varieties. It's described as a perfectly clean honey with a hint of grapes. At 13.65% alcohol, it also has a crisp acidity. Douglas spotted this at the at the Redwood Store. Thanks, Dougie!

Also in the news today Epic Brewing has finally penned a deal to build a new brewery in Denver Colorado. They're new location will be at 3001 Walnut St. in the River North Area or RhiNo district. It's a 20k sq ft. space that will host a Twenty Bbl double kettle five vessel brew house. A tap room is planned and they're hoping to get about 1000 casks aging in there by years end. Congrats, boys!

Today is also Fresh Cask Friday! This evening will be a continuation of last week's Double Black Lager offering. Donovan will be tapping a single firkin of Double Black Lager aged with a touch of El Dorado hops. Like always, a traditional natural re-fermentation in the cask and gravity poured directly from the firkin. The tapping will be at 5pm at Hoppers and will be gone quickly.

By the way, I've been getting the Holy Hell spammed out of me lately and I've had to make some changes to the comments section. I've tried to make access to the blog as easy as possible, but the douche bags of the world have just made it impossible to be a happy Beer Gnerd. It's just an extra step to post a comment, please don't let it hinder your participation.