If your ancestors or family came to Utah by car, train or plane instead of by a hand cart and they did not forgo their cultural tradition in regards to fermented grain, grape, apple or honey; I have just one thing to say to you my friends, Happy Pie & Beer Day!

I hope to have a piece of Bourbon Pecan Pie paired with a relatively young Anniversary Barleywine. What's in your arsenal today?

And if you haven't already, check out SLUG Magazines Pie & Beer Day Issue, with tons of content from yours truly other great local writers.

Pictured above: Wasatch's own Greg Schirf with best use of a pioneer hand cart ever!

The Utah Brewers Guild & Meditrina are hosting a special beer dinner at Meditrina on July 28th. Ten of our local Guild breweries will be pouring 2 oz tasters of each beer listed below paired with a specially designed six course menu for the first 60 guests. The cost is $60.

Tickets are available through Meditrina. Interested customers should contact the restaurant directly and make a reservation. Their phone number is: 801.485.2055

This is the first of many Utah Brewers Guild events. The more support they get from all us, the better our craft beer community will become.

Cheers!
Posted by Mikey at 3:49 AM No comments:

Just a quick reminder that the Evanston Brew Fest is happening this Saturday July 20, 2013. There will be 20+ breweries pouring on average of three to four beers, including Lagunitas, Deschutes & Goose Island.

The Festival goes from 1pm - 5pm with after party events going well into the evening.
Cost: $25 in advance
$30 at the gate
Online ticket purchasing information listed here.

This is a great small festival, it's proximity to the Wasatch Front and it's non-Utah bullshit makes for easy beer drinking Saturday. For other info check out the festivals Facebook page. Hope to see you there! 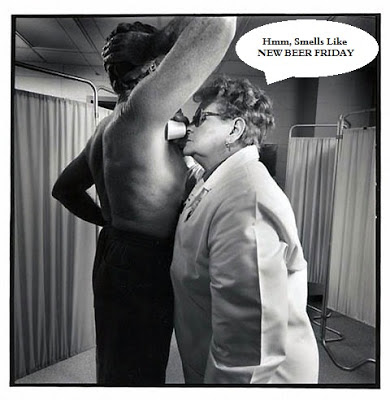 It's been another slow week, but don't despair; this week's New Beer Friday will make up for it all. This massive list of new beer options will have you feeling like everything is going to be alright!

Desert Edge Bavweisse Bavarian Weisbeir: The lightest offering of the week is wheat beer full of  banana and clove. Haven't had a chance to stop in have one of these yet. This is a brand new offering from Desert Edge. @ Desert Edge

Boulevard Grainstorm Black Rye IPA: The nose is citrusy and slightly metalic. Rye and roasted coffee round it out. The taste starts with citrus and roasted coffee. Semisweet chocolate and spicy rye come next with a piney hop finish. Not bad. But if your going to go with a "black rye IPA" I'd have to go recomend a  Wookey Jack. @ Bayou, Beerhive & Liquor Stores.

Deschutes/Great Lakes Class of  '88 Imperial Smoked Porter: The nose has roasted malts, big smoke and cocoa powder. The taste starts with chocolate, coffee and molasess. The smoke comes next but is much less pronounced than it is in the nose. The smoke blends nicely with the roast, neither one overpowering the other. Finishes fairly dry. An exceptionally nice, medium bodied smoked porter.@ Bayou, Beerhive & Liquor Stores.

Kona Big Wave Golden Ale: Big Wave is light golden ale with a subtle fruitiness and delicate hop aroma. A smooth, easy drinking refreshing ale. The lightly roasted honey malt contributes to the golden hue of this beer and also gives a slight sweetness that is balanced out by our special blend of hops. @Beerhive

Sierra Nevada Barrel Aged Big Foot: The taste starts sweet with molasses, vanilla, and nice drying pine follows. Bitter oak and some invited whiskey heat on the finish. Toffee and pine linger. There is a lot going on and all of the flavors work well together. @Beerhive

Boulevard Love Child No. 3: Oak barrels were used to age the majority of beer used for Love Child No. 3—with beer aged from 16 months to nearly six years. Another portion of the beer spent 11 months in stainless tanks, souring on Lactobacillus. While very tart, the sourness is short-lived and the beer finishes dry with a trace of oak. @Beerhive

Boulevard Terra Incognita: Hints of dark fruits including plum and fig. Finishes with a earthy/slightly dirty characteristic. Complexity of the beer is apparent as it warms with a subtle tartness at the finish that's very pleasing. @Beerhive

Rogue Farms Roguenbier Rye: Smoked malt dominates this tasty beer. It's sad because it takes over the rye and all but mutes it. it's a good rauchbier, but a lousy rye beer. @Beerhive

Squatters Wheat Peat: Haven't tried this one yet, you?

Widmer Hopside Down India Pale Lager: Part of Widmer's Rotator Series. Starts out as malty and assertively hopped. Quite richly flavored for a lager. Slightly sweet with a strong hop presence. Tastes almost savory bitterness is a little on the high side of medium. Mild caramel and an earthy slightly cedar flavored. If you like the RedRock/Pelican beer Cohoperation, you'll like this. @Beerhive

For today's Firkin Friday at the Bayou, Uinta Brewing will be pouring their Trader session IPA. It's been dry-hopped with whole leaf Amarillo hops in the cask. Amarillos impart a spicy orange and other citrus characters. They are also known to give a beer a bit of floral profile, too. Tapping is around 3pm.

Squatters Bumper Crop: The 4% version of this lavender ale is now on Squatters' seasonal taps around town.

Epic's Big Bad Baptist: It's good to be a local. There's a very limited, brewery cold case only, release of Big Bad Baptist. Batch #12 was brewed last October the 28th and was bottled on July 6th. It weighs in at 10.8% ABV.

Whew! Did I miss anything? Please share if I did!

The Annex By Epic Brewing 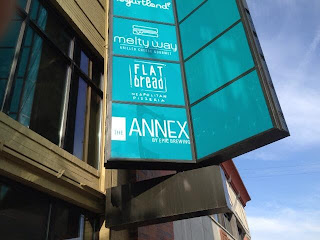 Just when you thought the Salt Lake area had enough breweries/brewpubs comes word that that the next great thing is just around the corner.

The Annex By Epic Brewing is a brand new brewpub by well... Epic, that's setting up shop in the "Sugarhood". It will have it's own brew house separate from the main brewery downtown. It will be occupying a space in the old Granite Furniture building and will hopefully be operating by this Fall.

Epic has been very busy as of late, their new Denver brewery is online and the breweries Taphouse/Pub will be under construction soon. Congrats Epic's!

There's one more new beer today that just slipped in under the wire. This one is a special beer from Uinta made in support of ALS Therapy Development Institute. Ales for ALS™ is a unique craft brewery-based fundraising initiative created to accelerate drug development for ALS patients today. As part of the program, participant brewers received a special blend of experimental hops donated by B.T. Loftus Ranches and Hopunion. With these hops, Uinta chose to brew a unique, Session Wheat IPA.


Uinta's ALS Wheat Ale combines the flavors and body of a wheat ale with the hop characteristics of an IPA.  Citrusy with subtle notes of pepper and white grape this wheat-IPA was brewed with forty percent malted wheat and dry hopped with the proprietary Ales for ALS™  experimental hop blend.

The limited amount (only 20 bbls were brewed) of Uinta's Ales for ALS brew can be found on draught in Uinta's Brewhouse Pub, Uinta's Beer Garden at Granary Row (Between 300 and 400 W, 700 S, Salt Lake City), and at select locations where Uinta beers are distributed.   A percentage of all proceeds will be donated to ALS Therapy Development Institute in support of developing effective treatment for Lou Gehrig's disease.
More information on the Ales for ALS™ campaign can be found at www.alesforals.com. 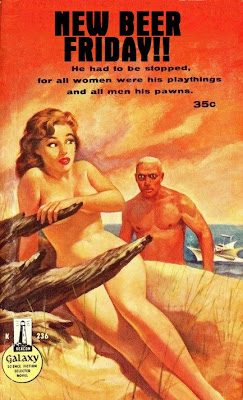 You can tell it's hot outside because all of our New Beer Friday beers are designed to quench!

Boulevard 80-Acre: The nose is full of lemon rind, grapefruit, and orange. The tastes is fresh with citrus, lemon, grapefruit and grape, moderately bitter, Not much for malt character, a hint of wheat. Finishes dry with faint pine. Definitely not your typical wheat beer. @ Liquor Stores

Zion Canyon 360 Ale: Don't have much info on this one. All I  know is that it's a light citrusy session ale. Anyone tried it yet? @ Zion Canyon Brewing

Zion North Rim Hefeweizen: Again, not much info, I'm thinking it's a wheat beer? Please help if you've had it! @ Zion Canyon Brewing

Budweiser 3.5: Apparently this version of Bud was made for the Swedish market, starting a few years ago.  It comes in at a whopping 3.5% ABV. Makes the local stuff (4%) look like malt liquor. I guess they figured, why not sell it in Utah & Oklahoma? they won't know the difference. @ Grocery/Convenience Stores

For Firkin Friday at the Bayou, RedRock 'be represent'n with an old school pale ale, infused with juniper, bitter orange peel, and if that doesn't peak your interest, it's dry hopped with simcoe hops. Yum!
tapping's are usually at 3pm. 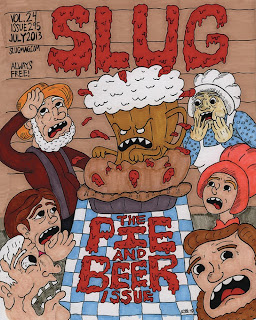 For the last six years SLUG Magazine has devoted one issue a year to Utah's craft beer drinking scene. I have had the privilege to be asked to contribute every year, now I'm the Mag's official "beer know-it-all".

This year we've dedicated our beer issue to the unofficial, counter culture holiday known as Pie & Beer Day (get it? sounds like Pioneer Day). We've covered the state bring you all that Utah's beer scene has to offer in one handy-dandy lil' publication.

SLUG Magazine is a free monthly publication that can be found at most bars, restaurants and reading stands in the SLC area. Please check it out!

Cheers!
Posted by Mikey at 4:50 AM No comments: 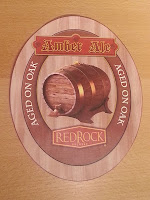 Are Fridays too firkin far away? Do you need your cask conditioned fix now in stead of at the ass end week? Well have I got news for you!

RedRock Brewing is embracing the new cask revolution like a Hipster embraces irony. The boys & girls in the brewhouse are getting ready to enhance some of your favorite RR beers and it all begins today.

Starting at 4pm in the downtown brewpub, RedRock will be offering their Amber Ale, ala-firkin aged with oak spirals. The oak should impart a toasty & spicy character to the ale that should work well with ales caramel malt profile.

If you love the cask, support places like RedRock that are offering them or they may go, bu-bye.

Another "Can" Do Attitude 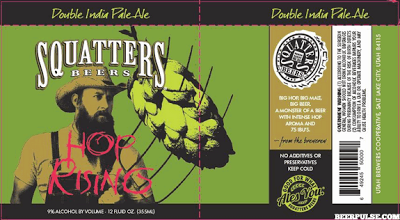 If you had any doubts, cans are the thing right now. Every local brewery that has embraced them has found success with the once shunned containers. Bohemian Brewing started with 'em, Moab Brewing came next, with Uinta close behind; now the Utah Brewers Cooperative is entering the game (again) with their own canning line.

The Wasatch/Squatters brands are no stranger to cans, it wasn't too long ago that you may remember seeing some of their canned products on grocery store shelves around the state. They may have been slightly ahead of the curve and people were likely hesitant to trust their craft brands to packaging that had a bad rep. Those canned beers were not packaged in Utah, these will be.

It looks like the new cans will have a new look and they'll be starting with two Squatters brands, Full Suspension Pale Ale and Hop Rising. What do you guys think of the new trend and what beers/breweries would you like to see in cans?