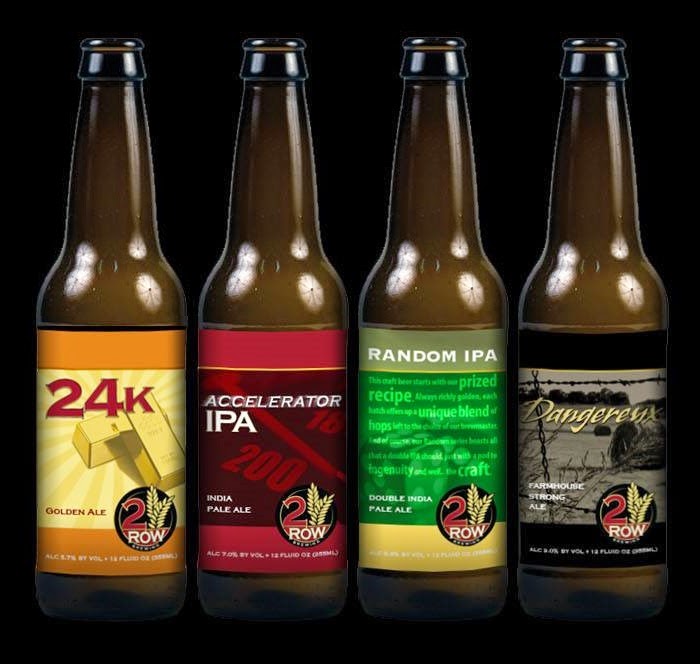 Tuesday at the Utah Department of Beverage Control meeting, Brian Colman owner of 2 Row Brewing in Midvale received his final licenses, making 2 Row Utah's newest brewery. Along with his manufacturing license Brian also applied for and received a package agency license so that they can sell their suds, cold - direct to the public from the brewery.

The initial line-up from 2 Row will be as follows:

The only thing the brewery is waiting on is approval of the labels shown above, once that's done look for the beer to flow weeks after that. Congrats Brian and Dede! 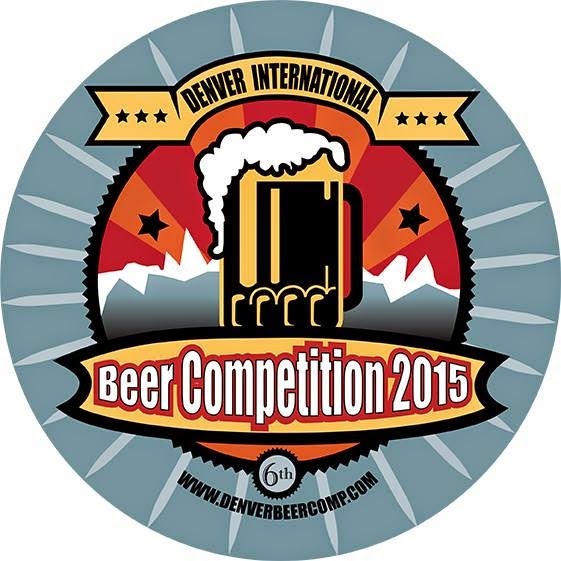 Three Utah breweries took home medals in the 2015 Denver International Beer Competition. The 2015 competition received more than 300 entries from brewers in more than 22 states and 6 countries. The judging took place on April 18 & 19, 2015, more than 24 professional beer judges and six beer stewards, participated in the 6th annual competition at the Omni Interlocken Resort, Broomfield, Colorado. The judges awarded a total of 217 medals in 41 style categories, plus Best of Show.

Here are what our local breweries came away with.

Congrats to all! If you wish to revisit some of these beers, all should be available to try around the state at various bars and eateries. Here the complete list of winner including the categories that the beers metaled in.

Cheers!
Posted by Mikey at 4:04 AM No comments: 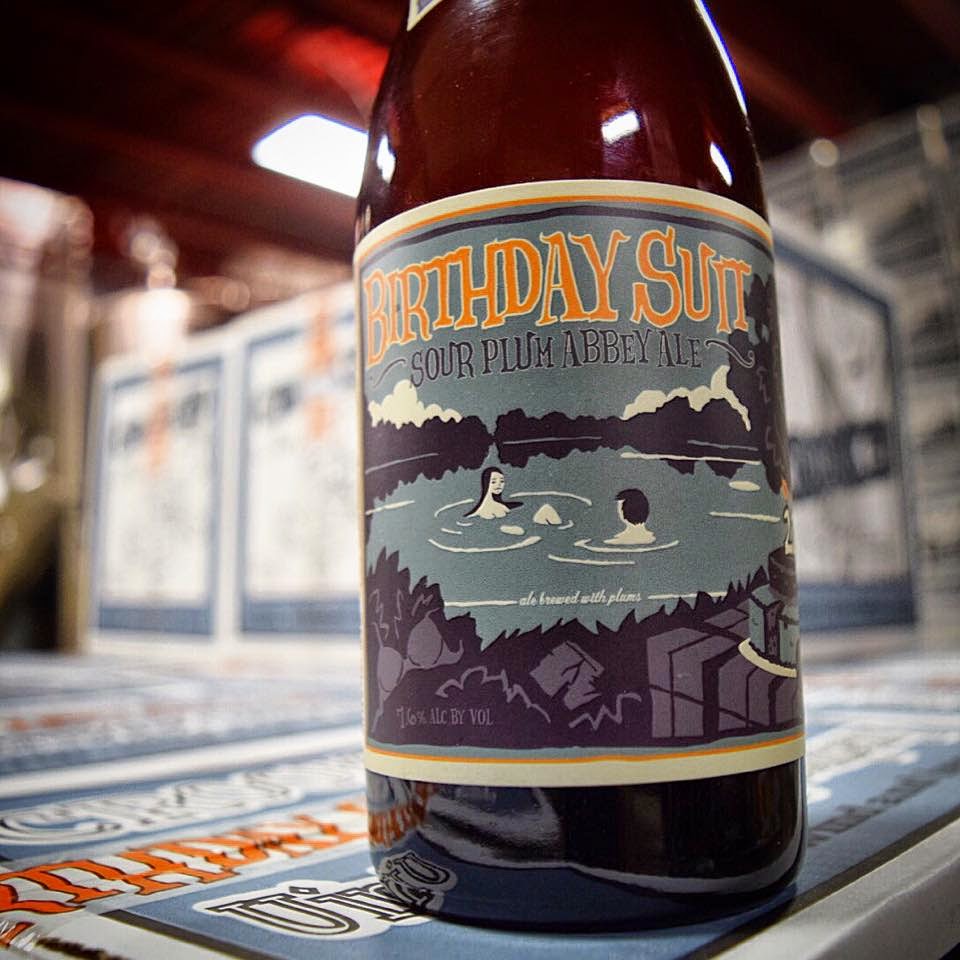 Uinta's 22nd Birthday Suit is finally out. It looks like it went on sale at the brewery mid Friday afternoon. I haven't seen many tasting notes on it yet, partially due to the the fact that nobody's had a chance to try it yet since the bottle shop at Uinta isn't open on the weekends. Well, it should be open today. The Little Big Beer Store is open for the purchase of beer and retail items. Hours: Monday through Friday 12 pm – 6 pm. Get on it!

It's described as having a playful combination of sour tanginess and subtle dried fruit esters. The sour plum Abby Ale is currently in the fermenter and will likely be released sometime next month. 7.6% ABV - 750ml corked and caged bottle.

Oh, and you may have noticed that after nearly a decade we've finally updated our logo. Any thoughts? Much thanks to my pal, Owen Richardson for the artwork. 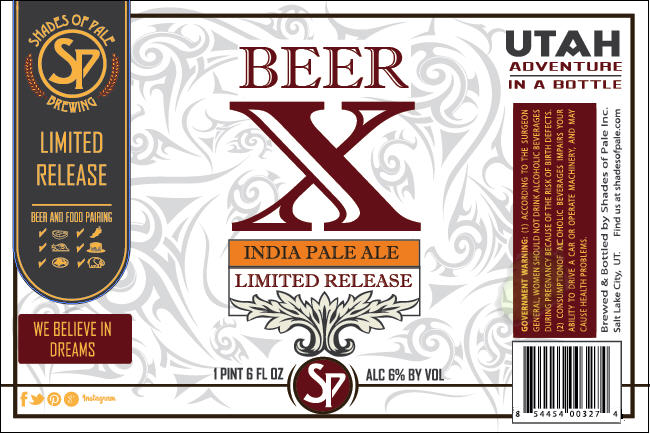 There's not much happening for a proper New Beer Friday, but we do have a new limited release IPA from Shades of Pale Brewing. This India Pale Ale is under their Beer X Series, a new rotating label that will change often.

This IPA is mostly piney hops with a hint of floral and citrus. Malts are near toffee-esque in their sweetness. A fairly prominent bitter and yeasty finish. This SOP's first high gravity beer. It comes in at 6.0% ABV and is only available for purchase at the brewery. 154 Utopia Ave, South Salt Lake City. 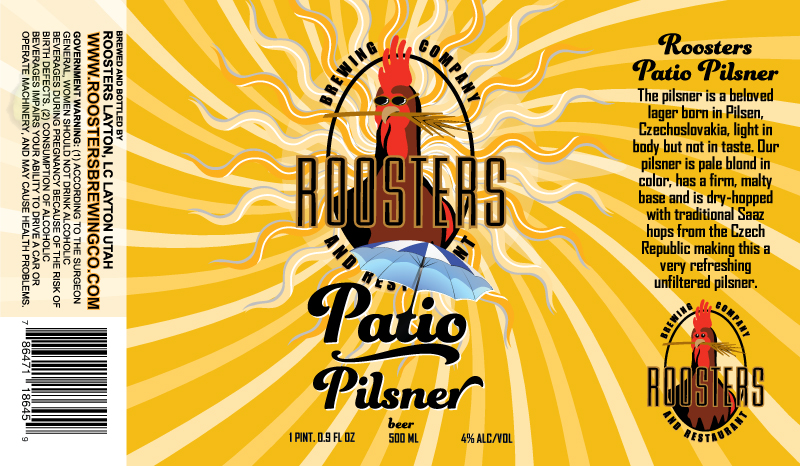 Looks like Roosters' Patio Nights Pilsner is going to be available in some new packaging in the next couple of weeks. Until now if you wanted Roosters' locally made lager, you had to get your growler filled, this new bottled release called simply, Patio Pilsner will be available at both Roosters locations and select grocery/convenience stores. This looks to be Roosters' classic recipe just packaged in their unique 500ml bottles. 4.0% ABV. 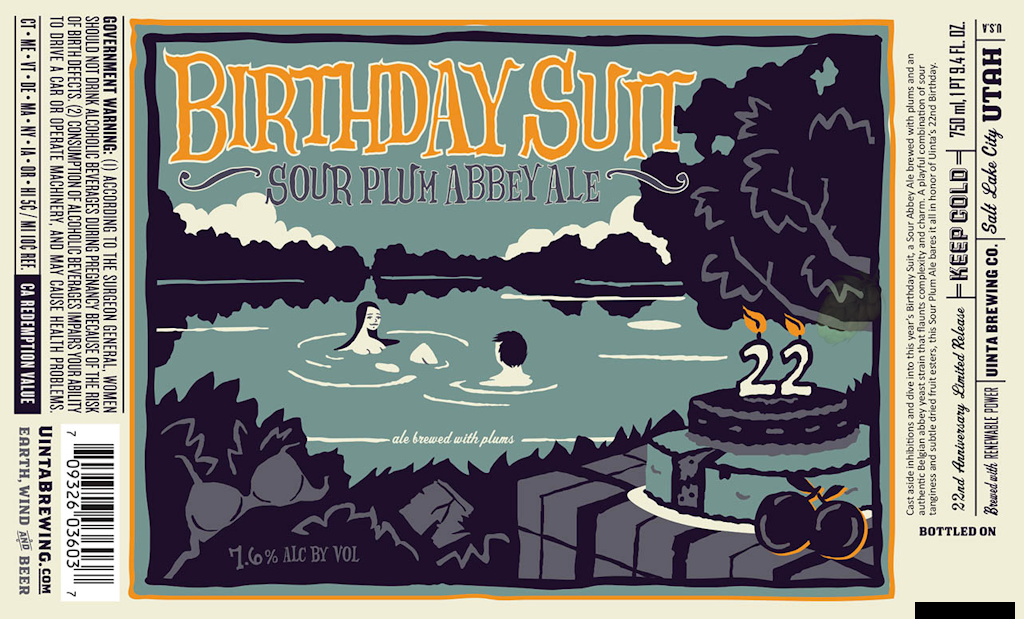 Here's a preview of Uinta's new Birthday Suit label. This year's incarnation of the brewery's anniversary ale is going to be a "sour abbey ale" brewed with plums and an authentic Belgian abbey yeast strain that's full of all of the bold character that have made Abbey Ales famous.

It's described as having a playful combination of sour tanginess and subtle dried fruit esters. The sour plum Abby Ale is currently in the fermenter and will likely be released sometime next month. 7.6% ABV - 750ml corked and caged bottle. 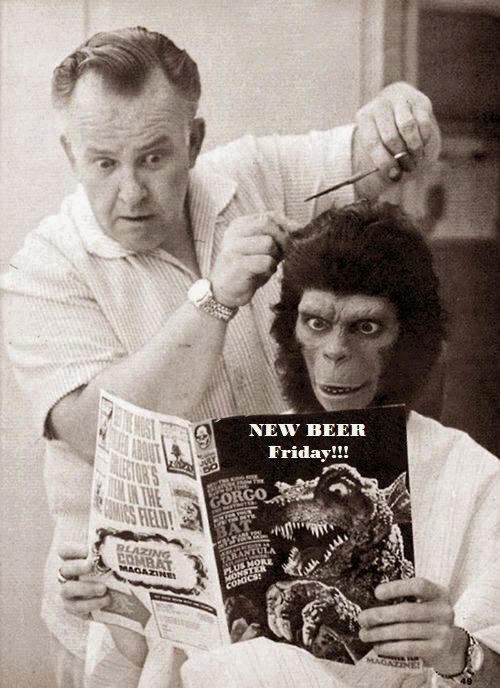 There's a lot out there this week, including the arrival of the Aztec beers from San Diego. Some popped in under the radar last weekend while I was gone, but here's this week's New Beer Friday descriptions.

Park City Brewery’s Last Pitch IPA is described as a sessionable India Pale Ale with a golden orange hue and moderate to low malt backbone, smooth with a slight caramel sweetness. Generous and multiple hop additions provide 60 IBUs of hoppy bitterness and a rich bouquet of hop flavors and aromas that include piney, spicy, floral undertones, dominated by bursts of citrus and grapefruit. We dry hop our IPA to provide additional tropical and citrus hop aroma. This Last Pitch of hops completes the balance of hop character. @Park City Brewery

Avenues Proper Stumble Bee is described as a honey Vienna lager. This traditional Austrian lager style is all about the delicate character of the malt. We decided to add another element by brewing with local Avenues-raised honey from Catchin' A Buzz Honey. Gathered from all over the hillside neighborhood of the Avenues in Salt Lake City, this honey displays the intense character of wildflower honey, but with a refined balance. Pouring a brilliant orange, this lager starts with a hint of honey sweetness but the fermentation leaves it dry. A light German noble hop character combines with hint of wildflower aroma to finish off this hyper-local beer. 4.0% ABV @Avenues Proper

Lagunitas High-Westified Imperial Coffee Stout - Black in color with a tan head. The nose is char, coffee and whiskey. The taste starts with espresso notes, rye and vanilla. Next comes the whiskey barrel, it's full of rye spiciness - it pairs well with the toffee flavors from the malt. In the end you'll pick up some nice tobacco and leather notes. This is a brilliant beer, aged in Utah's own High West Rye Whiskey barrels. Snag some if you can. 13.1% ABV @ Beerhive

Anderson Valley The Kimmie, The Yink & The Holy Gose Ale - Described as a bright, golden color and tight creamy head, the earthy wood undertones develop into a light mineral aroma with a hint of lemon zest and tropical fruit. Before boiling, the wort is kettle soured with lactobacillus, imparting an initial refreshing tartness that gives way to a subtle fullness. Flavors of guava and peach are followed by a slight sea salt dryness and lemon sourness that is enhanced by coriander and post-fermentation additions of salt. The finish is dry, effervescent, and lemon tangy. 4.2% ABV @Bayou and select DABC. If you spot it some leave the info in the comment section please!

Piraat Triple Hop - A nice orange color with a big foamy head. The nose is peach, citrus and some sweet banana. The taste pretty much follows with peach playing the dominant role. Herbal hops and boozy alcohol round out the back end. 10.5% ABV @Bayou

Poperings Hommelbier Dry Hopped - Hazy amber color. Estery Belgian yeast in the nose with some mild floral hops. The taste starts with unripe peaches and sweet apples. Spicy and grassy hops round out the end. Some citrus bittering in the finish end. 7.5% ABV @Bayou

Gulden Draak Quad 9000 - Not the most attractive looking beer, an  opaque, orange-brown color. The nose has rum and pear aromas. The tastes is similar with the addition of brown sugar and bubblegum. The finish is surprisingly dry with hop spices and alcohol heat. 10.5% ABV @Bayou

Troubadour Imperial Stout - Surprisingly clear, dark brown color, really filtered the hell out of this. The nose is malty and chocolaty with some caramel notes. The taste starts a bit fruity with some coffee, toast and chocolate flavors. Smooth. 9.0% ABV @Bayou

Scotch Silly Cognac Barrel - Not had this one yet. It's described as having a lot of dark fruit flavors with wine and liqueur sweetness. Some minor peat smokiness as well. 11.0% ABV @Bayou 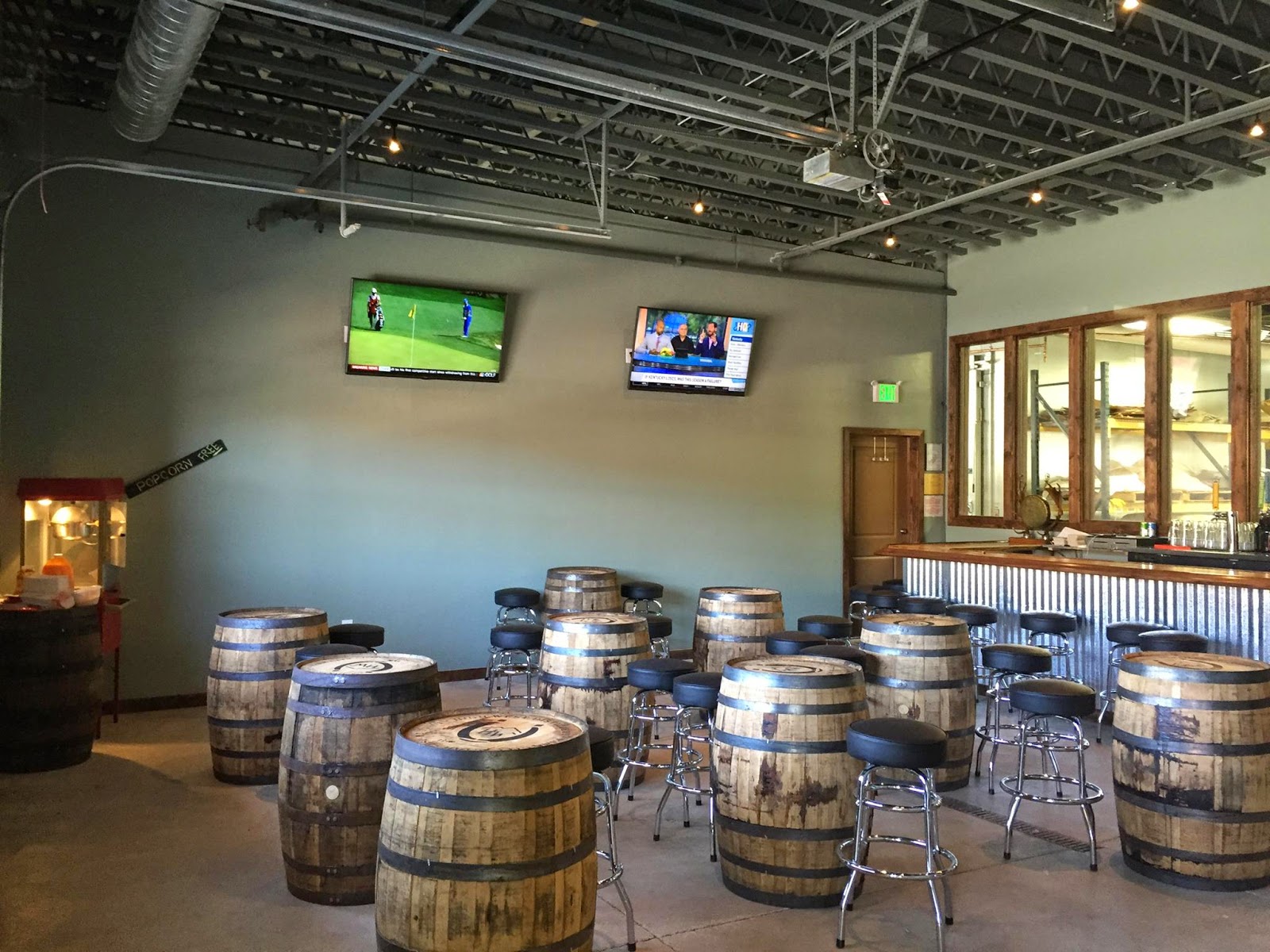 The Park City Brewery's new Tap Room is now open to the public. Utah's newest brewery currently offers all four of their debuting 4.0% ABV beers - Last Pitch Session IPA, Boogie Water Brown Ale, Hooker Blonde Ale and Breaking Trail Pale Ale. Food will be offered through a variety of food trucks, check their Facebook page for updates. The brewery is  located at 2720 Rasmussen Rd. Suite A1, just off the Jeremy Ranch exit off I-80.

The hours initially will be Thursday - Sunday 1-9 pm. 21 and over only.

Apparently it's also National Beer Day. Hmm, how should we celebrate it?..... 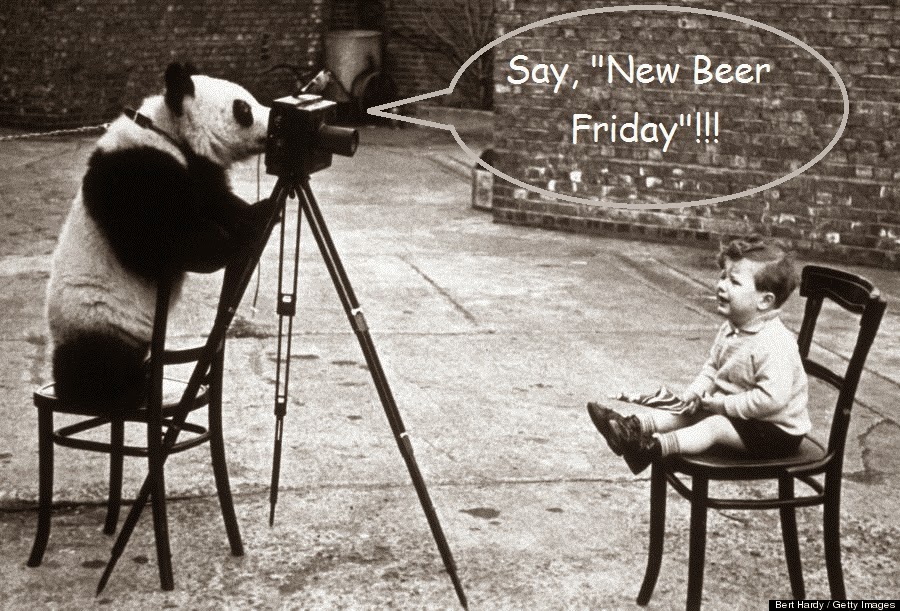 Need a lil' sumpin to brighten up your "conference" weekend. Look no further!

Sierra Nevada Harvest Single Hop IPA: Idaho 7 - Pours a bright golden amber color two fingers of sturdy head. The nose is a combo of  juicy citrus, floral, and spicy hops. The taste starts off like the aroma. Juicy with big notes of citrus fruit and pine. Orange peel, mango, and melon come next with notes of caramel and biscuit rounding out the back end. Finishes dry and hoppy. 6.5% ABV @DABC

Park City Hooker Blonde - Haven't tried this one yet. It's described as, being clear with a bright, straw yellow hue, the Hooker Blonde Ale makes use of a single, noble hop variety throughout the boil for a zesty spice flavor and bitterness.4.0% ABV @Jupiter Bowl

Avenues Proper Salted Caramel Porter -  Inspired by their next door neighbors at Hatch Family Chocolates, who are famous for, among other things, their salted caramel candies and ice cream, this dark ale is described as being pleasantly surprising with its contrasting flavors. The smooth and dark flavors of the porter base are contrasted by the rich sweetness of house-made caramel and both are accented by the use of local salt in the brew. The result is a balanced beer with a little something extra that would go great with deserts. 4.0% ABV @Avenues Proper

Vernal American Chocolate Stout - Haven't tried this one yet. American Stouts tend to be on the hoppier side combined with the chocolate notes it should make an interesting contrast. 4.0% ABV @Vernal Brewing

Epic Lil' Brainless Raspberry - The raspberry is subtle and tart with some dry and puckering tannin notes. You get some floral bitterness on the back of the tongue. With a finish that is semi tart and dry. It has that rich, estery and spicy, Belgian yeast funk backing up the base beer. 5.2% ABV @DABC, The Annex, ask for it at your favorite watering hole. 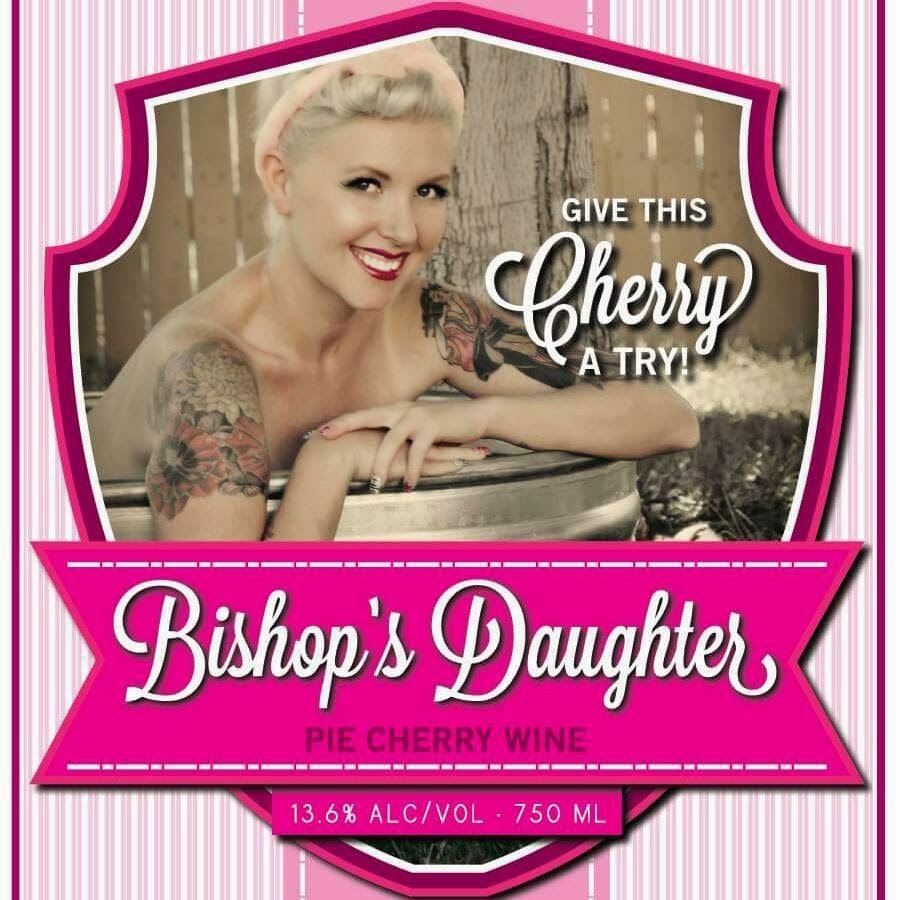 Hive Winery Bishop's Daughter Pie Cherry Wine - Described as having a soft and inviting cherry nose. This delightfully balanced cherry wine has a bright clean cherry flavor, the result of an unexpected flavor complexity with rich cherry back notes and a subtly tart finish that will leave you wanting more. Just in time for LDS General Conference, "Bishops Daughter" features beer lover/close friend/Hop Bombshell Misti Cobb on the label. Her classic Pin-up girl looks (I'm sure) adds greater dimensions to the "body" of the wine. 13.6% ABV @Hive Winery.

Cheers!
Posted by Mikey at 4:09 AM No comments: