I Want It in the Can! 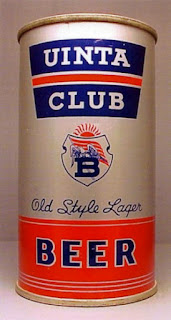 Now that Uinta is going to offer a canned option for some of it's beers, we thought it would be helpful to help the boys and girls at Uinta, by giving them the local beer geeks perspective on what the consumer would prefer to have in cans.

So we've created a poll. Not every beer that Uinta make is on it. It mostly their regular line-up. The Crooked Line of beers was intentionally left off because they have their own dedicated bottling line and it's likely that will not change... But, you never know.

So pick as many as you want, the poll is in the column to the right. It'll be nice to see the Uinta name stamped on a can once again.

Last Friday Uinta Brewing announced that they were in the midst of a huge expansion project that will not only bring more space for the brewery, but more jobs and a canning line.

Uinta has developed plans for a second plant, a 34,000 sq. ft. building, which is slated to break ground in July, 2012.  The new facility will house Uinta’s packaging equipment, cold storage, a second lab, employee tasting room, and additional office space.  All told, Uinta Brewing Company will operate on a more than 5-acre brewing campus. The project is expected to be completed in early 2013.
For this brewery, the new facility isn’t the only thing on the rise.  Aware of the sluggish economy, and eager to help local business, Uinta is thrilled to be adding a host of new team members.  The brewery’s growth is directly responsible for a 40% increase in jobs.

Uinta recently acquired the land immediately south of the existing brewery. Following the recent demolition of the preexisting structure, from which 100% of the materials were recycled.

With the new facility, Uinta will be installing a canning line, adding a new option to their current packaging lineup. The Uinta team, comprised of outdoor enthusiasts, is excited to offer a package that pairs well with adventure. Uinta has not finalized which brands will be dressed in the new aluminum package, and the team welcomes your input via a Facebook poll. Visit Uinta’s Facebook page ( http://www.facebook.com/pages/Uinta-Brewing/136640885735?ref=ts ) to let them know which brands you would like to see (drink) canned.

I think cans are the direction things are headed. I'm glad more breweries are figuring this out.

Cheers!
Posted by Mikey at 6:58 AM No comments: