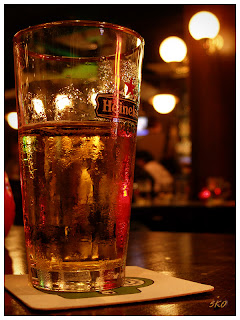 I've been noticing a trend among beer geeks across the web. Like many, I give my opinion on beers of all types. I also look to see what others think. It's funny to see the wide and varied reviews that people have on any particular beer. Especially The Macro Beers(Bud, Coors ect).
Looking at beer reviews vs. "blind" competition results. I see a curious trend. Now, I'm guilty of this myself. When reviewing, "beer snobs" are easy to "poo-poo" Macros that are placed before them, because they're mass produced, uninteresting or that the beer lover in question might be accused of not really knowing what a real beer is.
But some of those same "snobs" often give the same beers high praise when analyzed in a true blind tasting. Every year for the past decade my wife and friends and I attend the Great American Beer Festival in Denver. On a yearly basis we all seem to scratch our heads when awards are handed-out and macros win medals that micros should be winning. For example, the 2006 American cream ale or lager winner was Red Dog from Miller Brewing Co. Red Dog won a gold medal! Red Dog??? that's nuts, right? Or that Pabst Blue ribbon won a gold for American-Style Lager. No shit! PBR is the best American Style Lager 'till next year. These tables at the festival always seem to be void of festival goers. So I ask you. Is bias a good or bad thing for true lovers of beer?
Posted by Mikey at 10:16 AM 1 comment: 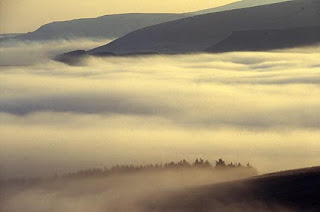 Those of us who live along the Wasatch Front, know full well the pattern of atmospheric inversions. They develop, they leave. Then soon develop again. The same thing is apparently true with beer as well. After sampling Deschutes Inversion last week another Inversion came along. This time from our friends Desert Edge. This one isn't an IPA. It's more appropriately a Rauchbier (smoke beer). Get it? Smoke beer, inversion? Anyway, I got a chance to try it at the Bayou last weekend, it was quite good. I haven't had great experience with smoke beers. They're usually overly-smokey and one dimensional. Or, they just tend to taste like burnt beer. There are only a few I like, and even fewer of those could be considered good session beers. Desret Edgse's Inversion isn't the greatest Rauchbier I've tried, but it is moderately smokey with a nice maltiness beneath. There's no hop profile, it;s all smoke. Also, it's a little thin. But that helps with it's drink ability. It's a good seasonal and it's a style that doesn't come around all that often. Check it out at Desert Edge and The Bayou.
Posted by Mikey at 2:19 PM 4 comments: 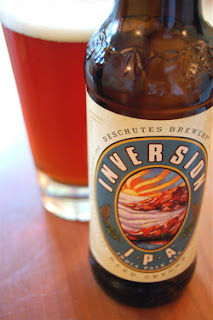 I just scored a sixer of Deschutes new IPA, Inversion. I'm not sure if this one is meant to replace the Quail Springs label or what, but I'm definitely dig'n it.
It pours a bubbly, light amber color with a finger of frothy head. The nose is strong with pine and grapefruit resins with bearly noticeable maltiness beneath. The taste starts with a hop assault up front with a nice, toasty carmel backbone. the finish is bitter and dry. It's nicely overbalance. Not astringent at all. It's what IPA lover want in an ale. Full of flavor over-balanced, and bitter. An excellent brew. Much more appealing than the more balanced Quail Springs. I wish Deschutes was available in town. It would be a staple in my fridge at home.
Posted by Mikey at 1:03 PM 1 comment: 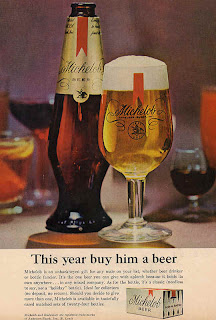 Anheuser-Busch is rumoured to be revising the formulas of its Michelob line. Beginning soon, Michelob and Michelob Amber, and I guess, Michelob Light will be 100 barley malt. No adjuncts. When the Michelob brand was introduced back in 1896 it was a 100 percent barley-malt pilsner.
In 1961 the brand was reintroduced as one of A-B's "higher tiered" beers. Back in the late eighties when I was just a burgeoning, beer twit. I looked to Michelob for to help me expand my beer palate. Don't laugh, Michelob Dark was my first attempt in getting away from ordinary beer. It was dark and cost more dinero. I was living the dream baby!!! If the rumors are true we should be seeing it in the next few months. Also, if you've tried it, give us the skinny.
Cheers.
Posted by Mikey at 9:31 AM 2 comments:

This One Goes to Eleven 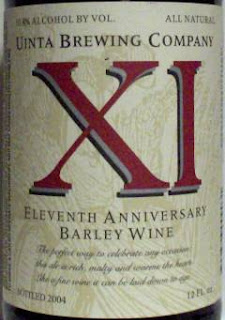 People outside of Utah seem shocked when I mention that our local brewers actually produce beers that hurdle the 4.0% mark. They seem to be equally surprised to find out that our beers amass pantloads of awards and praise, nationally and internationally. This past weekend at the 2007 Toronado Barley Wine Festival one of Utah's lesser known "big beers" came up smelling like a rose. Or at least Cascade hops. Fifty-four Barley Wines and ninety judges from all over North America converged at the Toronado in San Fransisco to enjoy and select the best.
First Place: Four Stars Big Nugget 200, Alaskan Brewing.
Second Place: Four Stars Angel’s Share, Port Brewing/Lost Abbey.
Tie for Third: Three Stars Anniversary 2004, Uinta Brewing and Doggie Claws Three Stars, Hair of the Dog.
I haven't tried the other three, but I'm very familiar with Uinta's. It poures a dark chestnut/orange hue. The nose is of burnt oranges, warm caramel malts with some heavy toasted breadiness with pungent hops that produce pine and citrusy overtones. Earthy notes sinder behind most of the hop twinge in the nose. It gives my sniffer an orgasm! The taste starts with hops up front, bittering with pine and dark citrusy stuff of orange and highly ripe peaches, malts play second fiddle with burntish caramel and toffee, crispy biscuit toasty edging, touches of chocolate, brown sugar, and then turns back to a hoppy finish of pine and citrus orange. The bottle says it's at 10%abv but it doesn't burn like it. I have six packs of the no. X and XI that I'm laying down to age. I just hope I can keep my paws off for the next couple years. This is without a doubt one of the best barley wines that I've ever had.
If you can find a X or XI snatch 'em up. If not try the XIII it's available now.
Posted by Mikey at 11:46 AM 3 comments:

Sensory Overload is a Good Thing 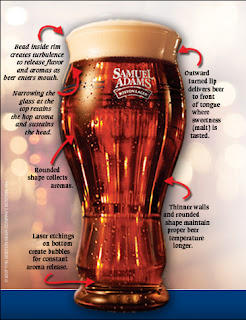 If your one who enjoys his or hers suds, you know that beer, like wine is best when served in it's specifically designed glassware. Every styles has it's own glass and the styles have been around for many years. Recently, The Boston Beer Company began recruiting "world-renowned sensory experts" to work on the design of a glass that would "helps sustain the head of the beer, which enhances the release of signature Noble hop aromas found in Samuel Adams Boston Lager," a company spokesman said. "We wanted to create a glass that offers beer lovers a full sensory experience by fully showcasing Samuel Adams Boston Lager's complex balance of malt and hop flavors." This new glass will be available as a set of four, for purchase this march on the Samuel Adams website. I think this is a stunning piece of glassware, I'm defiantly gonna pony-up some cash for a set.
Posted by Mikey at 1:40 PM 1 comment:

Mmmm. Good beer things be happening this month. Jenny "Queen of Beers" Talley of Squatters fame, has a new seasonal in the fermenter right now that she's dubbed "Cherry Luv". Cherry Luv is a Flanders brown ale. The styles' name makes you think Irish Ale but it's actually a Belgium Ale from the its Flemish region. Jenny describes her newest ale as medium bodied, reddish-brown in appearance, with a gentle malty flavor and no hop bitterness. The aroma is a complex mixture of fruits and estery smells of plums, raisins and cherry. She used both brettanomyces yeast and red tart cherries in fermentation to create an authentic sour Belgian farmhouse ale with cherry accents. It is definitely a beer for the true enthusiast and one who loves a "Rodenbach" style ale. Jenny will also be coming out with Squatter's first Certified Organic Amber in about two weeks. These styles don't wrear their heads much, so get your ass down there and have a goblet or two.
Posted by Mikey at 9:25 AM No comments:

Since the Micro-Brew revolution began in the mid/late eighties, the Wasatch Brewpub was the only craft brew game in Park City. Another micro appeared briefly in the late nineties (park city brewing) but was absorbed by The Moab Brewing a couple years after opening it's doors.
Anyway... the small Utah town where beer was reborn just got a lil' fatter. With brewpubs.
Red Rock and Squatters brewpubs staples of downtown SLC have each opened satellite locations in the states skiing mecca. So, after a day of tumbling your ass down a hill, weather your on sticks, board or bike support your local craft brewers. Red rock is located at 1640 W. Redstone Center Dr. Squatters has acquired the space of the Mt. Air Café for it's new Pub near the corner of Kearns Boulevard and S.R. 224 . And of course Wasatch is still at the top of main st. Slainte.
Posted by Mikey at 9:36 AM No comments: 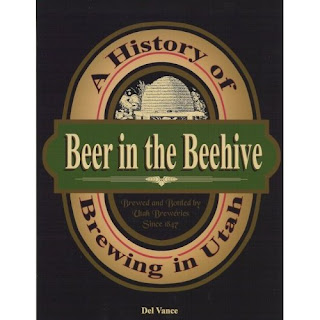 If you live in Utah and love beer, you know that the states breweries and brew pubs offer-up some pretty yummy barley beverages. Most people will trace the states brewing heritage to the late eighties and some may even take you back to the forties and fifties. But take it back a hundred-plus-years and you'll find that beer didn't just flow, but flowed in rivers. Salt Lake City of course had a fair number of breweries off and on since the area was settled. But smaller, less populated areas like Ogden, Manti, Logan, Alta and Parleys Canyon had also set up proper breweries to take care of the rest Utah's beer starved populace. I always knew beer had been in Utah since the Mormons brought it with them from the mid-west. But I had no idea how many breweries actually existed in the state, until long time local beer advocate Del Vance Published his book Beer in the Beehive last December. If your from Utah or live outside of the state this book is a must read. From Brigham Young's own whiskey distillery to myths and misnomers. This book is a great read. It'a available at most local book stores and brewpubs and also on Amazon.com.
Posted by Mikey at 11:14 AM No comments:

Since no one else is stepping-up, (except for Del Vance) I'm going to have to. I'm getting off my fat-ass and i'm gunna start talk'n bout some serious mountain suds again. It's a shame, there's been some great stuff to talk about over the last year. New beers, awards, books, breweries. The list goes on. Tomorrow we get it on.
Posted by Mikey at 10:58 AM 1 comment: