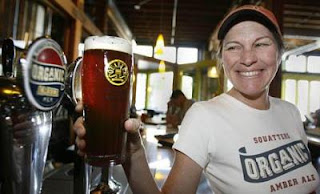 It might seem that Squatters brew-pub get a lot of "pub" here at Utah Beer. That's probably true. They always seem to be trying something new. So, what's so note-worthy now?
Squatters Organic Amber Ale, the state's first and only certified organic beer. Squatters already has an amber ale on it's menu(Emigration Amber Ale). This is an organic version.

The ale is brewed from organic pale and caramel malted barley and aromatic hops. The taste, is a caramel-like maltiness with a hint of sweetness. Organic certification requires high levels of cleanliness and sanitation. Which as any brewer knows is paramount to brewing anyway.
But it also requires strict segregation of ingredients "from grain to glass." The barley is grown from organic seeds, using natural methods of pest control such as lady bugs and composting rather than chemical fertilizers. Organic ingredients must be stored separately and tanks at the brewery must be meticulously cleaned. Jenny's organic beer will be available in bottles and draft in the next few weeks.

And while were on the subject. I spoke with Will Hamill from Uinta Brewing Co. They are also debuting they're own organic certified beer. Available soon.
Posted by Mikey at 8:20 AM 1 comment:

What are you Drinking? 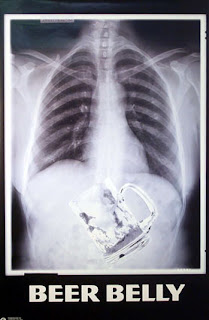 Last month at the Craft Brewers Conference in Austin, Tx. A survey was released in regards to what kind of person buys craft beer. The report delves mostly into socio-economic backgrounds, styles and brand loyalty. It's not surprising that money is a factor on who buys what. Since craft beers cost at least a few bucks more than most macro brews, it’s not surprising that the buyers of the craft labels skew toward higher-income households. And that they’re more-likely to be college-educated.

However a higher level of education doesn't necessarily translate in to brand loyalty. “People are loyal to the "craft" category but trade between brands,” Nick Lake of ACNielsen told brewers. So, what are craft beer drinkers buying, style-wise?

According to Information Resources Inc. American pale ales are the most popular craft style at supermarkets, with sales of $79 million last year. Next are seasonal brews, at $65 million, amber ales at $51 million, wheat beers at $39 million, India pale ales at $28.6 million, strong lagers at $23 million and light beers at $20.7 million.
Pilsener, the most popular style produced by the major breweries, and are ranked only 15th among craft beers, with only $4.5 million in sales. However, even this category is on the rise, up 45 percent over the previous year.
Posted by Mikey at 12:47 PM No comments:

Utah's only beer friendly cinema has changed hands. Brewvies owner David Movitz has sold the business to Randall Miller, the previous owner of Starship Theatres. "I didn't want to sell, to be perfectly honest," Movitz said Monday afternoon. "I owed some back money to the landlord and the tax commission. We fell behind. I felt pressured" to sell. Movitz and Matt Pernichele opened the downtown Salt Lake City cinema pub in 1997, modeling it after similar venues in Portland, Ore. The tavern has since become a popular gathering spot for people over 21 who come to play pool, eat, drink beer and take in a film on one of the two screens. "I plan to keep Brewvies relatively the same but plan on some remodeling and upgrades," Miller said Monday. "Brewvies is an institution." Drink and movie price specials during the week make it an affordable draw. Non-matinee tickets go for $6, and all Wednesday showings are $3. Movie-going customers can order food and drink at a counter and then get an assigned number. Once inside the theater, whose seats are backed by a ledge on which to set refreshments, a small electronic sign on one wall lights your number when the order is ready.
Brewvies has 23 employees, who Miller plans to retain. The theater has been closed since last Friday and is set to reopen sometime this week, Miller said.
Posted by Mikey at 2:22 PM No comments: