The Czech's love they're beer. They have one of the highest per-capita beer consumption rates in the world and created what has become the most popular beer style in the world. The Pilsner. Utahans love their beer as well. Even though we have one of the lowest per-capita beer consumption rates in North America, and a claim-to-fame of having some of the weakest beer around. So, what could tie these two apparently different beer drinking cultures together?
When the Berlin Wall fell in 1989, and communism in Europe ended. It opened up Western markets that had been denied to some of the best breweries in the world for nearly four decades. Transitioning to free-market brought on new challenges to brewers who were eager to get they're products out to a Host of new international distributors.
In the early ’90s, Lev importer Milena Harvey—a Czech—had married an American and moved to the United States. As she looked for work, she noticed a market thick with good beer. But the only Czech beer available to the U.S. market was Pilsner Urquell. Harvey knew that dozens of quality beers were brewed in her homeland. So, she thought, “Why not import some here?” One of those brews was Lev. “We tried to introduce the beer to as many places as possible,” including Utah, says Harvey, who is based in Pleasanton, Calif. “Lev was just kind of an afterthought,” she says.
But Utah’s Department of Alcoholic Beverage Control, the state agency responsible for buying and selling all alcohol over 4.0 percent A.B.V, chose Lev first. They're explanation was that the beer is of good quality, is priced well and there are few similar beers on the market.
Distributed in 12 states, Lev has, for some inexplicable reason, made its biggest splash in the Salt Lake City market. It sells better here than anywhere in the country, says Harvey. Every year since it was introduced to Utah in 1995, the beer’s sales have increased. In 2006, the state consumed 10,000 cases.
Posted by Mikey at 5:18 AM 1 comment: 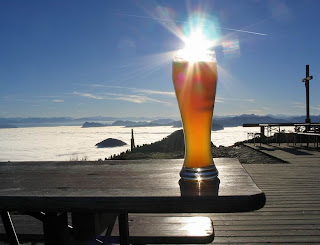 The gains are in part a result of rising costs for malting barley, one of the main ingredients in our beloved beer. So, "why is barley suddenly so expensive"? Well a booming ethanol market is to blame. "But Mikey, they don't use barley in the production of ethanol". That's correct my friend, corn is the main distillate for ethanol. All those farmers and ranchers that use corn for their livestock feed are finding that corns availability isn't what it once was and are now looking to other food sources(Wheat and barley) to supplement the needs of they're livestock.

We pay a lot for beer as it is in Utah. And I know that it'll get worse before it gets better. I Just hope paying a little more in this case is a sign things are improving on some environmental front.
Posted by Mikey at 8:53 AM No comments: