No it's not Jebus! It's that other guy with the God complex, Del Vance(kidding Del). After a very successful first printing Utah's second best beer scribe(after me) has decided to spew forth more detailed info about Utah's Beer; past present and future. Some of the new topics in the book include Zion Canyon Brewing and updated beer legislation. Available at most craft beer establishments and bookstores.

Also, if your wondering about the status of Del's new beer bar the "Beerhive House" don't worry, it's still in the works. The plans are at city hall, waiting to be approved. Apparently there's a huge back-log of plans waiting for approval. But Del assures me that once approved it should come together rather quickly.
Posted by Mikey at 4:38 AM 2 comments: 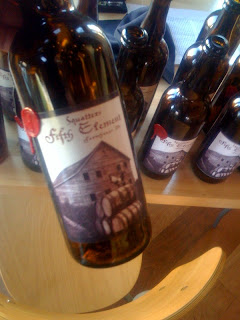 If you live in or have ever visited Utah, you know that we have to do things a little different than most states when it comes to the making and enjoyment our suds. What may seem usual and mundane elsewhere can be a big deal here.

Seasonal beers are nothing new to Utah's brewers, they crank them out all the time. But when it comes to special edition brews, things become a little tricky. Especially if those special editions want to venture above the hollowed 4.0% ceiling. Things are getting better. The recent creation of the of the states new Type 5 package license gives brewers the ability to create, bottle and sell, right from the brewery or brewpub. Eliminating the tedious and needless Sell, buy-back, then sell again, crap that brewers have had to deal with for decades.
The first beneficiary of this new law is Squatters Brew Pub. Over the past few years Jenny Talley has been seeking inspiration and advice from all over the world to come up with a way of putting a new spin on old-world staples. Seeking input from some of America's best brewers; including(but not limited to) Firestone Walker's Matt Brynildson, Vinny Cilurzo of Russian River and Garrett Oliver of Brooklyn Brewery. Jenny told me that the the support she had from these folks including many, many others gave her the inspiration to start creating more daring beers as well as a name for her first bottle conditioned, oak aged ale.
Fifth Element like most beers are made up from the four primaries. Malted barley, hops, water and yeast. The "fifth element" according to Jenny is the brewing community for which she credits a great deal of her inspiration. Fifth Element is a Belgian style Saison ale. These are traditionally brewed in the winter, to be consumed throughout the summer months. Fifth Element was brewed December 2007 and laid down to age in oak barrels January 2008.
Poures a cloudy apricot/straw color with a fizzy white head that reduced to a thin froth. The nose has a bit a of barnyard funkiness to it, with hints of lemon. The tastes starts with light citrus notes then transitions into tart green apples and peach. Next comes a dry oakiness that compliments the tartness well. The finish is a combination a champagne like dryness and bitter florals. Light and dry but highly drinkable. It's 6.75% ABV is well hidden. A great effort, well worth trying. Available only at Squatters. Cheers! 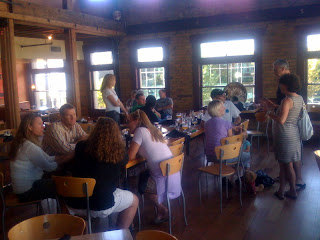 Squatters Debuted Fifth Element on August 13th
Posted by Mikey at 4:33 AM 4 comments: If you love beer and have never attended North America's largest beer fest, the Great American Beer festival... well... damn it, you should! Three days of all things beer, in city (Denver) that loves it's suds. Like GABF, The Great British Beer Festival is Britain's largest beer festival and brings together a wide range of real British ales, including a large contingent of American and international craft beers. There are at least 450 beers available throughout the festival. Golden ales, fruit beers, stouts, bitters etc. This fest is mostly about proper British ales, but this year brings a slew of some of the most popular and well respected labels of some of America's craft breweries.

Utah's Uinta Brewery is one of the few breweries chosen to represent this year. They're sampling a limited amount of Anglers Pale Ale, King's Peak Porter and Uinta 14th Anniversary Barleywine. Uinta is in good company, I'm sure they'll represent Utah well. Congrats to the Uinta crew!
Posted by Mikey at 4:39 AM No comments: Good news is a round the corner for breweries, distillers and consumers. Wednesday the Utah Alcoholic Beverage Control Commission approved a rule change that would no longer require brewers and distillers to ship their on premises made heavy beer and spirits to the D.A.B.C. warehouse for tags and taxes. This means that patrons can buy strait from the source in stead of having to travel to a state liquor store. The so-called Type 5 package license affects Salt Lake Brewing Co., Utah Brewers Cooperative, Uinta Brewing Co. and High West Distillery, all located in Salt Lake City.

This will really help with quality control. Before breweries would have to ship their products in unrefrigerated trucks to the unrefrigerated DABC warehouse. Now beers will stay cold from bottling to purchase.
Remember this has to do with stuff made on premises. For instance a six packs of Squatters India Ale, may only be purchased at the Salt Lake coop where it is brewed - but not at Squatters Pub Brewery in Salt Lake City, Squatters Airport Pub at the Salt Lake City International Airport or Squatters Roadhouse Grill in Park City. The license allows for heavy beer to be sold in bottles as take-out only where it's brewed although the beverages may be sold on tap in pubs. At this point, Squatter's Pub Brewery in Salt Lake City has no plans to sell take-out heavy beer - unless there's a high demand for it. Still, for those anxious to buy the soon-to-be released Fifth Element, a rustic, wood barrel aged sour beer. I guess we can try and ask our servers for a take-home bottle.... couldn't hurt.
Posted by Mikey at 7:47 AM 6 comments: