Problems With The Page

You may have noticed that the info and links located on the right side of that page have mysteriously moved to the bottom of the page. I'm trying to figure out the problem. Anyone not seeing this glitch?
Posted by Mikey at 4:07 AM 8 comments:

It's time for the 3rd Annual Salt Lake City Bar Crawl. This years bar crawl looks to be the largest crawl yet with estimates exceeding 700 people.

Registration will be held on the patio of the Green Pig Pub (31 East 400 South) On Saturday, July 2nd from noon - 8pm. There will be several groups leaving at different times. This year groups will leave at 2, 4, 6, and 8pm. Each group will be led by trusted Crawl Hosts and will help to keep you all participants on pace to complete the crawl. Look for drinking games, as well as free shit giveaways along the way. Maps, wristbands, t-shirts, and information will be provided at registration.

This year the amount of bars has been limited to ten bars. This provides more bar time and less foot time. There will be beer specials for participants.

Have fun but keep your heads. Plan your rides home accordingly and have cash/I.D. on hand.

If you have any questions, comments, or concerns contact slcbarcrawl@inthisweek.com or go to their Fa book page. 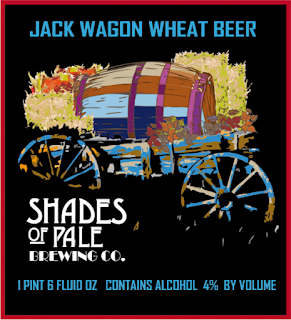 As the temperatures climb your likely looking for beers the that'll quench as well as satisfy.

There are many many options around that will fit the bill, but only one is new local and and frankly quite yummy.

Jack Wagon has a fruity lemony nose. The taste starts sharp and toasty on the tongue with a brisk, hoppy finish. This hefe is more complex than I thought it would be. It has an assertive lemon sourdough like profile in the end that I think will appeal to beginners and beer geeks alike.

Bottles are comming soon. In the meantime you can taste Jack Wagon at the Beerhive, Jelba's Ranch Inn and Teazers in Ogden, Bistro 412 on Main, Good Karma, Windy Ridge Taco Tuesday, Grub Steak and Lespri Club in PC.

Another slow week in the local beer world. No fear, I'll help you end it properly with some new stuff to quaff.

First up is a Belgian style dubbel from Sierra Nevada. Brewed in collaboration with the monks at the Abby of New Clairvoux in Vina, California this beer closly follows traditions established by centuries of monastic brewing.

Starts Malty with more than enough grassy hop bitterness for balance. Brown sugar, bread and nuts come next with mild caramel and cocoa. Finishes with a light, lingering peppery spice. Has a light to medium body and feel. 7.50% ABV. At the Beerhive.

The next beer I came across at the grocery store. It's from Lancaster Brewing out of the U.K.

Found this at Fresh Market. I imagine it's at most stores.

Have a great weekend and cheers!
Posted by Mikey at 8:57 PM 1 comment: 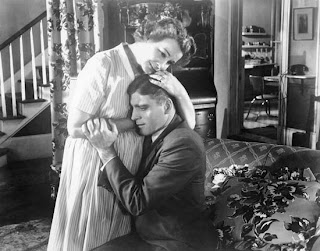 Yup, with good comes bad. I should just leave it there. If that's not depressing enough, I have more that goes with that statement.

When the DABC decided to start looking at putting their beer storage in the hands of local distributors, most of us thought it was a great idea. The distributors at least have some cold storage and that's better for our beer. Right?

One problem this brings (it's the bad that goes with the above mentioned good) is that all these out of state breweries are now scrambling to find distributors and there are but a handful of them with limited space as it is.

The result will likely be that some of you favorite out of state brands may be going away, for a long time or permanently. Big Sky Brewing will be one such casualty. The state will no longer carry any of their labels except for Moose Drool.

It's too early to say what else will be affected, but it looks like a trend we will likely have to deal with.

On the bright side. There are a lot of great local brands, with new labels coming almost monthly. Sorry for pissing in your Cheerios so early.

Last year Squatters introduced Big Cottonwood American Amber Ale as part of their Small Batch Series. It was a big hit. Big enough in fact to be brought back as a regular release.

Big Cottonwood Amber Ale is a 5.75% ABV version of Squatters popular Emigration Amber Ale. It's made with all fresh whole flowers Cascade hops with floral citrus aromas, and layers of malted barley flavors. They're using a new whole flower dryhop technique that gives it an amazing hop character. So it is definitely brewed for those who like their Amber Ales on the hoppy side.

Starting today, Big Cottonwood will be sold in 12 oz bottles and will be available at Squatters Pubs, the BEER STORE, Utah State Liquor Stores and fine establishments throughout the intermountain west. 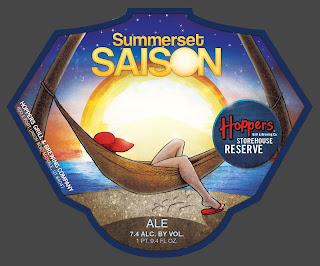 In regards to summertime beers there are many great style options out there. most are traditional like the basic Pils or Hefeweizen, however if you've spent any time in the vicinity of a craft brew house in the last few years you know the new word for summer in the U.S. Saison.

Saisons are farmhouse ale that are traditionally brewed in the winter, to be consumed throughout the summer months. Not so long ago it was close to being an endangered style, but over recent years there's been a massive revival; especially in the US.

This is a very complex style; many are very fruity in the aroma and flavor. Look for earthy yeast tones, mild to moderate tartness. Lots of spice and with a medium bitterness. They tend to be semi-dry with many only having touch of sweetness.

Hoppers Brewmaster and Secret Agent Donovan Steele has come up with a brilliantly timed addition to their Storehouse Reserve series called Summerset Saison.

For his Saison, Dono used a traditional saison grist of light crisp pilsener malt, malted spelt and some raw oats. A Belgian yeast strain known for its complex earthy/spiciness and powerful aromatics was added for extra depth.

To accentuate the natural crisp citrus aromas the yeast produces, Dono decided to break with the normal approach and add some powerful Citra hops for late boil aroma and flavor. It's a great pairing. It really blends the flavor profile of the Citra up against the yeast and grain qualities. That meant dry hopping it after primary. Not unheard of but not typical for a Saison ale. This beer is dry with a light orange hue.

For those not familiar with Citra it smells like tangerine combined with a fruit punch bowl with citrus rind. It's an amazing hop. A great beer for summer or for those that enjoy a rustic ale with amazing hops.

Summerset Saison should be bottled within the next few days and released by the weekend. We'll let you know, of course.

Breaking News! There are more beers at the Bayou that have just arrived.

The Brewdogs are quite wonderful. They won't last long. Again, they're only at the Bayou. They range from $7-$21. 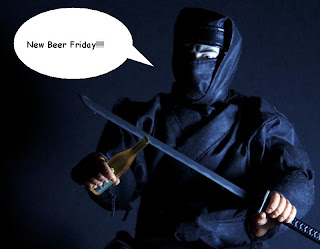 Wahoo! New beers for you.

Undercover Investigation Shut-down Ale also by Laguinitas. The nose is of toffee and booze with resiny hop notes. The flavor is strong well developed caramel with spicy element backing and pleasant booze burn. Hops are all around but without outright citrus or pine that comes out on its own, it melds with super sturdy malt for great balance.

Epic Hop Syndrome Lager: The nose is light with caramel and biscuit with some citrusy lemon hops. The flavor is light with bready malts, honey and pine.

The Laguinitas stuff is at the Bayou. The Hop Syndrome is a the Brewery as well as the Bayou & Beerhive.

And of course, There's the return of three favorites Squatters' Fifth Element & 529 as well as RedRock's Rêve Belgian Style Triple. Available at Squatters and RedRock Locations.

All Rêve'd Up for Summer 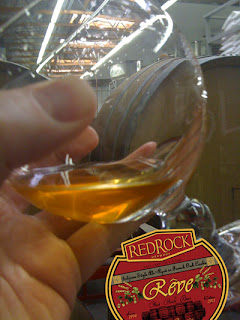 The photo in yesterday's post was such a hit that we are considering a "Men of RedRock Calendar". Nothing brings back the sexy like a shirtless man in knee high rubber boots being sprayed with sticky wort.

To ensure these Adonises stay lean and mean they're going to have keep hoisting those big oak casks full of yummy beer. So I urge you to get out and spend some of those hard earned Quatloos on some of RedRock's annual release of Rêve Belgian Style Triple. I had a sample at the Mountain Brewers Fest and this batch seems to be the best one yet.

Aged one year in oak, This beer pours a light golden honey color with a moderate fluffy white head that dissipated to a very thin froth. The nose is a little boozy with banana, cloves malt and ripe mango. The taste is very much the same starting with candied sugar and cloves that transitions into toasted malt, peaches and banana. The end is sweet and oaky. The alcohol is warming and welcomed, masked well by Rêve?s full body. It adds a whole new dimension to the beer. You really get a good sense of the oak in the finish.

I recommend cellaring some of these. They tend to age very, very well.

I Get By With a Little Help From my Friends 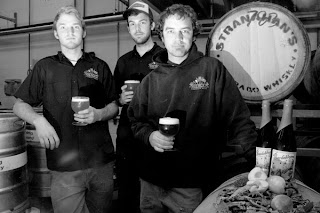 It's a lonely job writing a narrow niche blog like this. It's nice when good people who love Utah's beer scene as much as I do jump in to help spread the beer love and tell the stories of the people - who do so much to make our tongues and bellies happy.

So I urge you to go out and pick up a copy of SLUG Magazines Annual Beer Issue. It's full of great stories about the Land of Misfit Beers, written by great people (myself included) who love Utah's beer as much as we do. Get a copy now before their gone.

P.S. Those three ruggedly hansom specimens pictured above made Mrs. Mikey Squeal like a tween at Bieber-Fest. 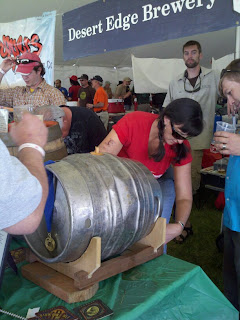 Sorry I've been away for so long. A combination of being out of town and a big drought in the local beer news scene has made for some very frustrating weeks, but I see the clouds beginning to open up and rain down a little good beer news.

Speaking of good beer news I just returned from a week of judging beer a the NABA competition in Idaho Falls and boy is my tongue tired. I swear to God, I drank more Bourbon than beer while judging the "wood Aged Beer" category. I'm guessing 95% of the beers entered in that category were kissed by Bourbon. Some... full on molested by it!

I won't complain... I can't. I was drinking great beer all week for charity. It's good work if you can get it.

Anyway, my trip aside. Utah's brewers really represented you well this past weekend, bringing home 26 medals - covering a full range locally made suds. Uinta Brewing did particularly well, winning 8 medals - 3 of which are gold - and they practically owned the American Barleywine category. Imagine that... Utah known for Barlywine. Ah, the age we live in.