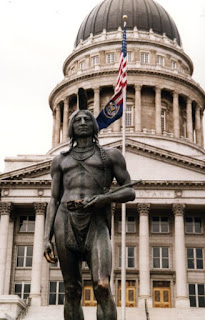 Well it's over. The Cluster on Capitol Hill wrapped-up late last night and Utah's beer faithful came out slightly ahead. Senate Minority Leader Mike Dmitrich's bill that would decrease the markup on locally made beer wine & alcohol passed the House and now awaits the governor's signature. SB95 would cut the markup the state imposes from 86 percent to 64.5 percent on heavy beer(over 4.0% abv) and decrease the markup on spirits to 47 percent.

As with everything in life, with the good comes the bad. If your reading this your probably not a huge fan of "malternative" beverages like Mike's Hard Lemonade, Smirnoff Ice, ect. If you are then you've got 'till October to purchase them at you local grocery/convenient store. After that they're off to the state controlled liquor stores, where the selection will drop and the alcohol content and prices will climb. "Why is this happening"? Well, the state of Utah and the LDS Church determined that the makers of these beverages are primarily targeting underage drinkers. And that this is the only solution. To justify the move legally the lawmakers site that anything containing alcohol derived from distillation must be state controlled. Note: the primary method of alcohol production in these bevs is through fermentation. The distilled alcohol in the drinks come from the flavoring extracts used for sweetness. The distilled content is around 0.5% abw per 12oz. bottle. Under this law mouthwash and food extracts have to go to the liquor store as well. Will they? I doubt it. but that what the law states.

To give you an idea of how messed up this is Jack Daniels Bourbon is 43% abv. 86 proof.
Mike's Hard Lemonade is 4.0% abv. 6 proof.
Listerine mouthwash is 27% abv 38 proof.
I got a little off topic but there it is, your latest, ever-changing Utah Beer-a-Thon.
Posted by Mikey at 7:11 AM

Good thing the state consulted with the LDS church on this matter; seeing as we don't have a separation of church and state or anything.

Actually I think this was, as Mike suggested, a pretty good session. We need to make so much more progress; getting rid of 'memberships', ending the 4% ceiling, and other things. But out here things are hard to change when drinkers are not united and a powerful minority of radical anti drinkers are quite strong. The basic problem still remains; we treat drinkers as a 'dangerous' minority who should be happy to have anything (many would wish for prohibtiion). The sad thing is that many states are like this. Thanks for the great info Mike.

Slight correction. Jack Daniels used to sell two versions of its bourbon: 43% and 40%. A few years ago, they got rid of the 43% version and they only sell the 40% version now.

Question for you: I heard the 3.2 thing in Utah applies to both grocery stores and "tap beer". Is it true that if a beer is on tap, it can't be heavy?

Thanks for the correction on the JD Ken. I'm a Van Winkle guy myself. Yeah, it's true about the beer. Grocery and convenient store can't sell anything over 4.0% abv and the same goes for beer on tap. If you want anything above 4.0% it's in a bottle or can. Or we have to bootleg a keg from one of lovely neighbors like Colorado or Wyoming. Our legislators would tax the aroma of beer if they could... I should shut up now, before I give them any ideas.

Rep. Johnson's bill that would have legalized home brewing in Utah was never heard in the Senate. It is still technically illegal to home brew in Utah. Sorry to disappoint you, but maybe next year will bring better results.

I am well aware the bill didn't make it. I had missread a senate document and made the wrong assumption on the bill and corrected with a new revised post the next day.