Help Make It A Cold Day in Hell 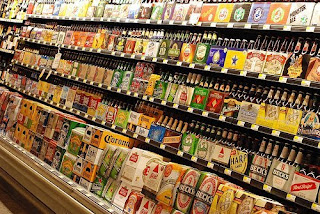 Consumption of liquor, wine and beer is up in way-up in Utah and to accommodate imbibers the states is building bigger and better outlets at a record pace. Two new state stores are among 10 remodeling or building projects along the Wasatch Front and southern Utah, adding 40 percent more retail space for wine, heavy beer and distilled spirits.
While these are great and long overdue, there is still one thing that will be missing from these shiny new facilities. Beer coolers. With all the taxes that are paid, it's still hard to believe that the concept of a simple refrigerator unit per store is beyond the scope of reason. Now I'm aware of the excuses spewed forth from our LDS overlords. They believe a cold beer bought from a liquor store will be so enticing that we'll be chugging 'em down before we can get our heathen asses in our death Yugo's. It's amazing that societies out side of Utah can function without such keen guidance.
And it's not just about cold beer to be consumed sooner than later. The people in charge seem to forget or just plain don't care that beer is a perishable product that is better when fresh. For Christ sake many breweries won't even sell beer to Utah because of this arcane policy.
Well if you really want to do something about it, grab your mouse(your other mouse Doug) and follow this link to to sign an online petition to get refrigeration units in Utah State liquor stores. It's really a no brainer. If you've bought a single beer from a state liquor store in the past 100 years you'll immediately benefit from it.
Credit and thanks goes to Ross Metzger from Tributetobeer.com for getting this rolling. Tell everyone you can think of to get on this and sign today! Cheers!!!
Posted by Mikey at 7:32 AM

hey, thanks for this link. I linked back to you from Sundaybeer.blogspot.com.

Thanks Don. And thanks for helping to get the word out.

Thanks for the clarification man. I'm in, this is absurd. Come on guys New Belgium is right next door! More beer, especially more good beer.

Just signed it. I also created a facebook group called "Cold Beer in Utah" to help spread the word.

Chased said...
This comment has been removed by the author.
9:21 PM

If they put in refrigeration units, do you think they'll raise the price of the beer to cover the cost?

Jimse, I wouldn't put it past them. However I'd say no. The state prices beer reasonably, but rather taxes the holy hell out of it. The state legislature would have to approve yet another tax hike; and taxes on heavy beer is already near the 90% mark. There is sufficient money being brought in from those taxes to pay for these new units and keep the kids in school lunches. But like I said, These are rational people we're appealing to.

or I should say ARE NOT rational people.