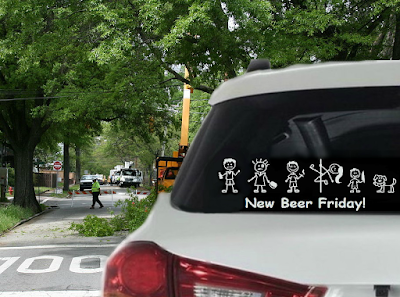 Our New Beer Friday family may not be traditional, but we are interesting AF! This week's selection may not be huge but it's diverse a hell. Have an excellent weekend!

Proper - Hopothetical: This New England style IPA has a descent fruity/tropical nose that's full of the aromas most of you love. The taste has an Orange Julius vibe that is creamy, fruity and juicy. Very little bitterness; the 'juice' is really all that lingers. Crisp, medium body. 6.1% - Available at Proper and Craft.

UTOG Scottish Ale: This seems to be like a "wee peat" style of Scotch Ale. The aroma is malty with a bit of smoke, with little in the way of hops (which is appropriate). The taste starts lightly malty with toffee notes then transitions to a more smokey profile. The smoke comes of as phenolic and medicinal - sort of like a Band-Aid. 4.0% - Available at UTOG.

Shades Kveik #6: Apricot and peach are the featured flavors here. Of course the kveik base is nicely tart but the stone fruits used here pretty much run the show. Though the flavors can be somewhat similar, the apricots to me steal the show. Very fruity and tasty with zero bitterness. 6.3% - Available at Shades and most beer pubs.

Mother Earth - Four Seasons Imperial Stout: Missed this one; and it makes me sad, because it sounds delicious. This imperial stout is aged in bourbon barrels and was brewed with tart cherries and liquid cocoa. Sounds tasty, eh? 11.7% - Available at Beerhive, Slackwater.