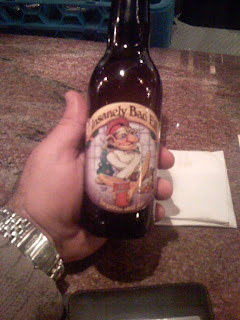 I don't know... I guess I should have been closer paying attention. The label was a dead give-away, I should have noticed the clues. It was my own fault. I mean it's called Insanely Bad Elf for Christ's sake!!! The label has some kind of sociopathic mutant elf all bound up and and looking like he's ready to molest a cat.
This is another from the boys at Ridgway. It comes from a line of "theme beers" the brewery does around the holidays. It started with Bad Elf, then to Very Bad, then Seriously, Criminally and finally Insane. I haven't tried the others but this reminds me of one of those beers that people make just to say "We can make one of those."
Poured a clear ruby red with absolutely no head at all. The nose was boozy with raisin and toffee. The taste started sweet with caramel then transitioned into spicy raisin and fig. The finish was syrupy, boozy and cloying. A good dose of piney hops would have made this a much more palatable brew, but as it sits it's a tough drink'n little bitch. It's label calls it it an Imperial Red but let's not kid ourselves it's all barley wine. It's abv dials in at 11.2% and never lets you forget it. As a holiday warmer it will warm you right the fuck up. Straight jacket not included.
Posted by Mikey at 12:47 PM

ANY amount of piney hops would ruin such a perfect example of an English Barleywine. Drink your American IPA and leave the good beer for real beer drinkers!