A Pair of Jacks 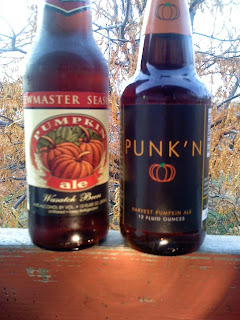 I love this time of year! Not so much for the weather or the shopping headaches but for the great influx of seasonal beers. So, for the next week or so, I hope to spread the word about some of the great beer options that are out there for your holiday enjoyment.

My first experience with pumpkin spiced beers was back in '98 at the Great American Beer Festival. My wife came up to me cooing over this great spice beer she had just sampled from this tiny mom-n-pop brewpub from Wisconsin. At first thought, the idea of a pumpkin beer raised an eyebrow. But soon after sampling, I was one of the converted. Basically, if you like pumpkin pie you'll most likely enjoy pumpkin ales.

Now, some pumpkin ale are with pumpkin & spices and others with just the spices. These two local options I believe are just spiced.

First one out of the gate is Wasatch's Pumpkin Ale. Poured a clear copper hue with a small cap of white foam. The nose was spicy with nutmeg, allspice and malt. The taste starts malty and nutty with great cinnamon and nutmeg essence. The pumpkin pie flavor is right on. the end is clean with a slight hopiness. The finish was slightly sweet.

Next up Punk'n from Four +(Uinta). Poured a dark, amber color with a thick white head. The nose was spicy with cinnamon and nutmeg. The taste jumps right into a complex spiciness of cinnamon, nutmeg, clove and allspice. The end was light and dry with slight cascade hops coming through. The finish was dry and spicy.

All in all these are both fine examples of pumpkin spice ales. However they are both very different. Wasatch's has much more maltiness in the backbone, which compliment it's spices nicely.
Four +'s(Uinta) is much dryer. It lacks the malty sweetness but makes up for it with rich Holiday spices.

Depending on your palate either is a fine choice. Punk'n complements cheese cake well and Pumpkin Ale is a fine session drinker.