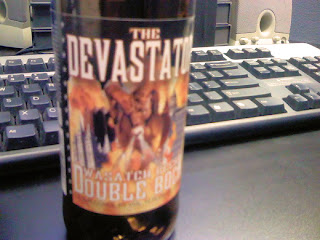 There's a new kid on the beer block and he's packing a welcomed punch. The happy kids over at Wasatch Brewing have been working on bringing more high-gravity suds to the Utah faithful, and have happily "nailed it" with Devastator. The Devastator is a Double Bock. If your not familiar with Bock Beers, they're a little more hearty than your normal beer. Double Bocks or Doppelbock are a Bavarian specialty beer that were first brewed by the monks of St. Francis of Paula. They're stronger than most beers (between 6%-10% abv). During the Spring religious season of Lent, monks were required to fast. High-gravity Bock beers; high in food energy and nutrients provided sustenance during this period. Hence bocks were considered "liquid bread" by the monks.

So, how does it taste? Pretty damn good!

Poured a nice clear amber/ruby color with a thin foamy head. The nose is nutty with chocolate, molasses and a bit of alcohol perfume. The taste starts with Molasses, brown sugar and pecans. spicy cocoa comes next with toasted grain and finishes with a nice hoppy pine finish. It's 8.0% abv is nicly masked. The label defiantly screams Utah. It says, Utah will never be the same.
Let pray they're right.

The artwork on the label is quite nice it depicts a Ram(Bock= Buck in German. Get it?) Busting through downtown Salt Lake City. Appropriately, snorting fire and being an all around nuisance. Sorry the pic is of low quality it seems when these come available to me, I don't have my good camera.

Devastator is available at State Liquor Stores, Wasatch brew pubs and most private clubs.
Posted by Mikey at 9:41 PM

(poor college student) the Devestator is fairly grainy, ok, nothing special. Drink about 1 a week, wish I had a big selection of German Doppelbocks!!!

I'd love to send this beer as a gift to my brother in Easton, Pa. Is it possible to find a vendor to do that?