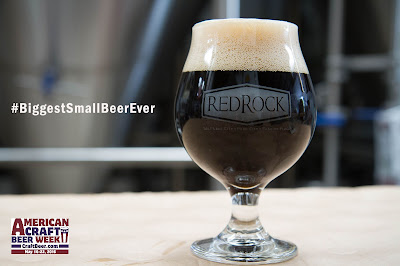 There is a special Nation Wide event happening today for American Craft Beer Week. If you're able, please consider joining in! Information follows.

Join Red Rock Brewing as they participate in Craft Beer Week's National Toast - an event where the whole nation salutes our favorite beverage. The official beer of the Nation-Wide Toast is the specially produced "The Biggest Small Beer Ever Made". This beer was made specifically for this toast - it will happen this evening at 6pm (mountain) - 8pm (eastern) at all RedRock locations.

We believe it’s a damn shame big beer still owns a lion’s share of the American palate. So we’re helping to put craft beer in the spotlight and give it the recognition it deserves by joining small and independent brewers from around the country in a unified movement to ‪#‎MakeSmallBeerBig‬.

Get yours at all Red Rock locations: Downtown, Fashion Place, Park City. Also, the Beer Store is pouring growlers of this special beer throughout the week for $6.50 per 64 oz. (plus $3 if you need the growler glass).

Shades of Pale
Beer Can chicken BBQ and Beer Garden grand opening!
Quarter Chicken side and beer for $12

Uinta Brewing
Craft Can Appreciation Day. All Uinta cans will be featured on special at the Uinta Brewhouse Pub for $3.00

Blind Taste Testing flights. Receive 4 samples of Uinta beer (2 at a time) and guess 3 out of 4 beers correctly to win your choice of a Uinta Branded Wooden Sign and to be entered into a daily raffle for a limited edition Stainless Steel Stanley Growler.

801 cans are our featured beer of the week. Our 801 Pilsner doubles as a delicious beer and a community builder - proceeds from purchases benefit local non-profit Trails Utah $3/can.

Free tours will be available to the general public starting at 6pm. Groups will meet in the Pub and then be lead on a tour lasting 45 minutes.
Talisman Brewing