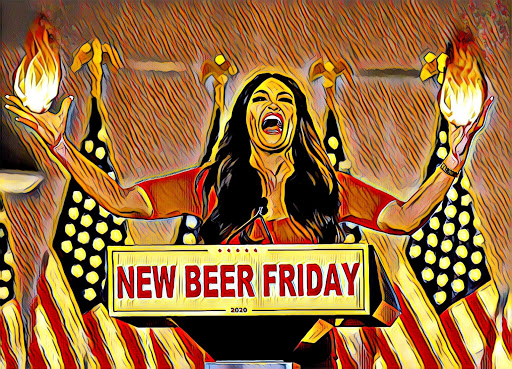 There's no need to scream. We've heard your cries, and in response we're giving you shloads of new beers to end your work week – along with some favorites that are making a return.

Toasted Barrel - Huckleberry Cream Ale: The aroma is mostly dominated by huckleberry. The taste starts again with the berries, some minor sourness and sweet malt. Slight nuttiness in the finish.  Light body, it's an overall enjoyable ale. 5.0% - Available at Toasted Barrel.

Saltfire - Master Control Program: Sadly, no notes on this one. This is being canned this morning and it goes on sale today. Super fresh! 7.1% ....end of line.

RoHa - Barrel Aged Porter: If there is ever such thing as a summertime oak-aged aged porter, this would be the one. Aromas of wood and whiskey. The taste begins with roasted malts and cocoa. Hints of bourbon and vanilla come next with a very nice oak finish rounding it out. 5.0% - in crowlers to-go only.  RoHa is now open for sit down business, with added outdoor seating and limited indoor seating. Check it out.

Fisher - Roating IPA: This week's new IPA is actually a double IPA and it probably Fisher biggest beer yet at 10.1%. This is a west coast style IPA, with big chewy malts and tangerine peel dominating at first. Grapefruit then joins in adding some pithy flavors. The end is mostly resinous pine with a bit of alcohol heat. There is a chance that this may be delayed today, so a phone call may be in order before heading over.


Fisher - Recession Rye: This rye ale has a nice dose of rye that slightly spicy with malts that are on the lighter side. Hops are mostly floral with a hint of citrus. Very nice. 5.0% - Available at Fisher.

Bewilder - Schwartzbier: Dark body with huge roasty aroma and flavor with hints of coffee bean, subtle dark chocolate along with clean and crisp  biscuity malts. A slight hint of floral hops in the finish. 5.0% - Available at Bewilder.

Lone Pine - Crush Puppie: Missed this one. Spotted at Maveriks in Davis County. If you've seen it elsewhere please share! 5.0%

TF - Corduroy: This sold out in hours in its initial release. If you missed it, you get another chance.

Epic - Barrel Aged Pumpkin: One of the worlds best pumpkin beers, in my opinion. The whiskey makes it.

Shades Peach Cobbler Kveik: It's uncanny how they duplicated the pie flavor.

Hopkins Brewing has a new selection a very limited small batch beers for you to enjoy this weekend.