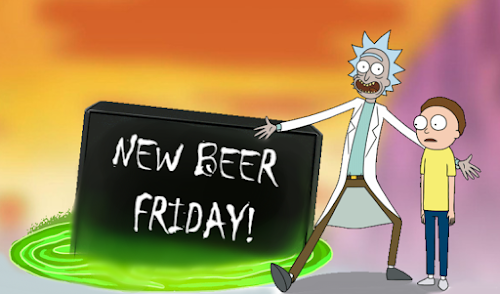 Grid City - Extra Pale Ale: Building on the success of their standard pale ale, Grid City decided to make two bigger versions using the same malt and hop bill. This version drinks like a pale should with nice caramel, citrus peel and pine. at 6.6% You'd think that it would be more like an IPA but it's not. The malt profile keeps it in check. Available mid-late afternoon on Friday. Call before making the trip, just to be safe.

Grid City - Imperial Pale Ale: At 8.6% you'd think this was an IPA as well, and technically it is. But the same malt bill keeps the base style alive with loads of caramel. The kicker here is the hops. They're big chewy and resinous with the same citrus and pine qualities. Available mid-late afternoon on Friday. Call before making the trip, just to be safe.

Shades - Double IPL: This is slightly sweeter than your typical IPL which gives it more of an IPA feel. The Citra hops give it a good dose of tangerine and it has a nice clean finish. Think: West Coast Double IPA. 8.0% - Available at Shades.

Shades - PB&J Blueberry: The base beer is Shades' kveik beer so it's slightly tart at first. Subtle peanut butter comes in next with light blueberry taking you the rest of the way. All the flavors are pretty balanced and the PB&J effect is pretty solid. 6.5% - Available at Shades. Not vegan friendly and it obviously has nuts.

Shades - PB&J Raspberry: The notes here are pretty much the same, up to the point where the raspberry kicks in. The berry is a little more assertive in this one and it does come across as being "jammy". If you like less peanut butter, the is the one for you.  6.5% - Available at Shades. Not vegan friendly and it obviously has nuts.

RoHa - Sophia: This is brett pale ale that was started right as the pandemic hit. It's a100% brett fermentation that gives it a slight balsamic nose. The tartness is fairly low with biscuity malts and dough being the primary flavors. there are hints of vague berries as well. If your into brett pales you should defiantly check this one out. Very limited supply of this one. This is the first in a series of four Golden Girls themed brett beers. Blanche, Dorothy and Rose will be coming soon. 5.0% - Available only at RoHa in crawlers to go.

2 Row - Old Fence Wrecker: This beer is a colaboration on many fronts. Made from a recipe formulated by award winning home brewer Zach Belles, this barrel aged barleywine. Look for flavors of caramel and toffee, followed by a hit of bourbon barrel that provides woody oak, vanilla and more caramel. Mid-palate continues with bourbon, and brings out sweet dark fruit notes of fig & raisin . Named for an unidentified Beehive bartender who's love of barleywines has resulted in more that one accidental fence demolitions. 11.6% - available today at 2 Row Brewing.