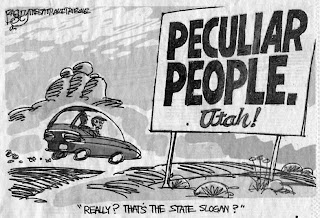 I honestly try to avoid the topic of f'd-up Utah liquor laws on this blog. But recently it's just unavoidable. Were it not for the absolute shitheadedness of some state lawmakers/leaders I'd be a much happier and much more well adjusted individual.
Over the past month or so Utahns and the world have been learning the "Utah Way" when it comes to liquor monopolies. Back in November we learned that malternative beverages need to be removed from store shelves because their deliciousness is too irresistible and impossible to keep out of the hands of babes.
We also learned recently that state liquor cops will go to any extreme to coerce restaurants and bar employees to violate state law. And the cherry on top, cold beer needs to be banned.
These three examples have become topics of extensive debate over that past few weeks. So much so, that the growns from within and from without are finally being heard in the states highest office.
When Gov. Jon M. Huntsman Jr. took office in 2005, one of the issues he identified in his campaign was to normalize Utah's liquor laws, as compared to the rest of the nation. The three previous hot topics have apparently struck a nerve. To combat the negative press the governor has proposed a change to Utah's liquor laws. To do away with the need for the meddlesome "sidecar" and bring the state's liquor pours more in line with the rest of the country.
Input from the gov regarding liquor reform has been long awaited.
Huntsman said that when he came into office, his transition team identified the liquor laws as an area that should be changed. It suggested allowing wine sales in grocery stores, easing private club requirements and increasing the 1-ounce limit - long deemed inadequate by out-of-staters and others used to the standard pour. But, he said, the proposals fell flat with legislators three years ago and haven't been advanced since. The new initiative sends a message, Huntsman said, to those from outside the state who think you can't get a drink in Utah and goes toward "proving the point that we aren't out of sync with the rest of the nation."
This seem to be more P.R. than real reform but I think it helps combat the insanity that the in-state neo-cons have been proliferating.
Posted by Mikey at 6:30 AM