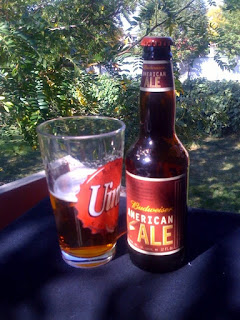 Over the last couple years I've had the opportunity(along with many other beer gnerds) to sample some of Anheuser-Busch's experimental beers. These are beers that are occasionally offered at beer festivals to showcase what they're capable of doing, and to get some insight into what the consumer has a taste for. Most of these will never see shelf time at stores. Those that do will probably have little-to-no advertising and bearly a mention of who makes them. You've probably seen them. Shock Top Belgian White, Stone Mill Pale Ale, Jack’s Pumpkin Spice Ale, Winter’s Bourbon Cask Ale and Beach Bum Blonde Ale.

So what the difference between these (besides the size of the Anheuser-Busch font) and Budweiser American Ale? Advertising. You can't watch prime time tv or a sporting event without seeing it. The others, not so much. Why? not because they're awful, but because they want you to think that your getting a true craft beer. Not Corporate wannabe. So how is it?... Well... OK... It doesn't qualify as a great beer, it doesn't really fit a style guideline. But it's good enough to drink.
Pours a deep, clear amber with a firm two finger head that had moderate sustainability. The nose is lightly roasted biscuit and caramel. The taste is roasted grain and caramel with Just a faint hint piney hops. The hops fade quickly and give in to the malt. The finish is crisp and dry. Mouthfeel is on the side.
Lets not kid ourselves this is not an exciting beer. It is a transformational beer. A good entry level ale for people looking to get out of the macro rut. But if you want a good, widely available American Pale Ale look to Sierra Nevada's Pale Ale or Uinta's Cutthroat Pale Ale. Both will run you about the same, and are far better representations of the style and the term "American Ale". Cheers!
Posted by Mikey at 7:23 AM

I tried it at the GABF. They didn't have a line to get a taste and I was curious. :)

Overall, I agree; it's definitely an improvement. Still a macrobrew, but less like Coors and more like a Sam Adams. It's nice to see that taste is starting to hit the mainstream.

So have you tried this year's Sierra Nevada Celebration? I'm drinking one right now and I'm enjoying every sip of it.

I love SN Celebration. I'll be buying a case this weekend.