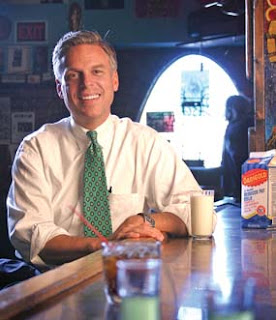 It looks like we're one step closer to doing away with
the dreaded private club memberships. Gov. Jon Huntsman Jr. isn't waiting for the state liquor commission to come up with a proposal. The Governor is having his own staff draft a bill for the 2009 Legislature to consider.


The Department of Alcoholic Beverage Control Commission voted back in July to start work on a proposal to eliminate requirements that would-be drinkers in Utah fill out applications and pay membership fees before being allowed into a private club. But in August, commissioners voted to "slow the process of drafting legislation on the private club membership issue at this time," after one member, Kathryn Balmforth, raised concerns about the need for any change to the law.

It's believed that the governor's office is stepping in because of political pressure surrounding the issue. In my opinion it would seem a prudent move on the governors part, due to the current economic climate. If we're truly seriously about competing for tourism dollars in a time of curbed luxury spending against states that offer true hospitality for adults who want to do adult things; then we have no choice but to enact these changes sooner than later.

I think Huntsman really has his shit together on this issue, and I hope the LDS Church and the state legislature have the foresight to see past their "political sensitivities" and concentrate on what's best for the state. Thus ends this sermon. Cheers!

Source: Deseret News
Posted by Mikey at 5:48 AM

If that was a sermon, I'm joining your church! I will happily drink a pint when these absurd 'private club' rules are trashed. And no reciprocity this time, lets not move forward and also back like we did last time. Also, would this potentially end the dumb rules about having a higher ABV beer in a brewpub or whatever?

This proposed legislation will be convoluted at best. I suspect a whole new slew of liquor licences to emerge if private clubs are eliminated. We'll just have to wait and see. I don't expect anything else to change.

Hey Mikey,
Do you have any idea where we can see the gov's proposed legislation? I imagine that the public might not get to see it until it passes. Hopefully they wont make the same mistakes they made with the smoking ban (phasing it in in indiscriminate ways instead of uniformly).

Mark, I don't believe that they've finished drafting that legislation. When it's completed it should be posted at the url below. If it passes out of committee.