New Brews Soon for You: Red Rock and Epic 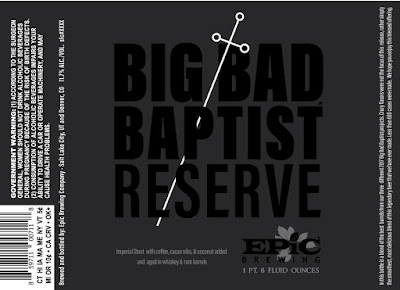 I found some new entries for this week's New Brews Soon for You feature. In this is edition well examine  two new beers that will finding their way into your fridges in the coming months.

Fist we have Big Bad Baptist Reserve from Epic Brewing. What makes this one "Reserve"? Apparently it's because this version is a blend of the best, of all three barrels from all three 2017 Big Bad Baptist variants. It's said that crazy flavors were not the focus here, simply the smoothest blends  that Epic has to offer. This will be a pretty limited batch when it hits. Only 600 cases will be produced. Big Bad Baptist season is still a ways away; maybe this will arrive sooner because of it's reserve status. At least now you can start planning your attack strategies sooner than later.

Our other beer comes from Red Rock Brewing Company. This is their Lime Gose. If you frequent Red Rock's pubs you're probably very familiar with this beer. It's been a popuar staple on draft over the last year, now it's making it's way into bottles and Harmons' grocery stores. This is a killer warm weather beer, I imagine it will hit late April or May. 4.0% ABV

Stay close for their releases and other New Brews Soon for You beers.