New Brews, Soon for You: Shades of Pale 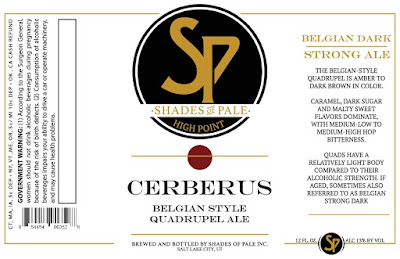 In this edition of New Brews, Soon for You, we're featuring new stuff from Shades of Pale Brewing Company. Owner/Head Brewer, Trent Farger and Cellerman/Biologist/ Brewer, Marcio Buffolo want you to know they're serious about their commitment to bring high end craft suds to Utah's beer nerds. Beginning this week, the South Salt Lake City brewery will be introducing four new beers that will range from cocktail-like to barrel aged.

Cerberus: Belgian Style Quadrupel Ale - The base beer here has appeared before in SOP's Bourbon Barrel Quad. This an opportunity to get to know the solo act. This beer is amber in color, with caramel, raisin, plum and stone fruit flavors. Smooth but boozy with 13% ABV.

Mojito: A Mojito inspired barrel aged beer - This beer is inspired by the traditional Cuban cocktail of  the same name. It's a slightly tart beer, aged in rum barrels with mint and lemon peel added. Refreshing and intense. Like a mojito. 4% ABV.

Brett Saison Gin barrel Aged - French saison barrel aged in Gin barrels with Brettaromyces for 14 months. Smooth, slightly tart, dry but with a lot of spices, fruits aroma. This new barrels aged beer is said to have many wine like qualities with sourness you can only get from long months of barrel time. This one is highly anticipated by sour beer fans. 6.5% ABV.

All indications are that Aphrodite will be the first to be released (sometime this week). The other three will gradually hit the market throughout March and April of 2018. I'm really looking forward trying these. What are your thoughts on these new additions?

Labels provided by Shades of Pale
Posted by Mikey at 5:20 AM