New Brews Soon For You: September 2018 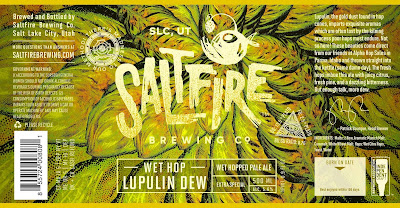 In today's preview of new brews that are coming soon for your consumption we have what looks to be a shload of new IPAs; guaranteed to cuddle your inner hop fiend. The breweries creating these beers have not officially announced release dates on these, but trust I will let you know when they hit shelves/taps.

Saltfire We Hop - Lupulin Dew: That gorgeous label pictured above is for Salfires new Wet Hop Ale. Wet Hop IPAs require that hops hit the brew in less than 24 hours from the time they were picked. This can be expensive due to overnight shipping costs but the taste is well worth it.

Saltfire Frankly Mr. Shankly: This IPA is Saltfire's entry into the Hazy IPA game. Look for low bitterness, a high amount of tropical/fruity hops and alomg with a good dose of malts.

Proper Hopothetical: This experimental IPA series from Proper will feature - whatever the hell the
boys and girls at Proper want. This "mad scientist" beer will hit whenever with whatever. Hopefully sooner than later.

Vernal Autumn Harvest: I love Harvest ales! They're always so fresh and bright and they seem to add more flavor than the typical beers especially when the air outside tends to get a little crisp. This won't be your typical harvest beer. This one will dial in at a hefty 10%. Boom!

Talisman One-Off Ale: You're not going to get a lengthy description here. The name says it all; look for another whatever/whenever beer from high to low ABV. I do know that whatever these beers turn out to be, they'll be in 22 ounce bombers. Seriously, It's a great thing when breweries invest in experimental one off beers.

RoHa Shambo: Another New England style is headed our way. Shambo is a the RoHa brewing Project's ante into the hazy IPA poker game. This one will come in at 7.0% ABV and should feature a fruit salad of tropicaL and citrus delights. All that and a handy 12 ounce can.


Uinta Pack it Out: This new IPA from Uinta describes itself as being "unfiltered" not hazy so you can

take that to mean whatever the hell you want. Uinta does a pretty good job with their IPAs, even at session strength. They hope you'll take this 4.0% beer with you when recreating in the greatnewss that is Utah. Remeber to pack it out after you pack it in.

Images found at Shipcomplient.com
Posted by Mikey at 4:23 AM