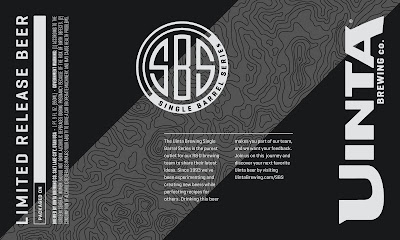 In the beer world it's all about the fourth quarter. This is generally the time of year when the breweries begin to bring out their heavy hitters and and most coveted beers. As I began my research into what is "on tap" for later this year, I found quite a few intriguing options from Uinta Brewing that I thought you might be interested in.

Pictured above is Uinta's Single Barrel Series. This is more of a special edition label than a specific beer. This label looks to be an outlet for Uinta's R&D department. It's designed to give you an idea of  what Uinta is working so that you can provide feedback into what you'd like to see from the brewery.

Next up is Migrator. This is a Dopplebock aged in Bourbon Barrels. Bocks and bourbon are a perfect pairing the sweetness of the beer provides fertile ground for the whiskey to build upon. This beer will dial in at 8.0% and be available in 12 ounce cans.

As we get into harvest time in natural that the breweries feature fruited beers that reflect the autumn months. This label for Valley Orchard Wheat looks to feature cherries and could likely involve other fruits as well. This will probably be a 4.0% beer that could be
more than just a seasonal beer. This will also be offered in 12 ounce cans.

Brut IPAs are going to be the big thing in the next couple of months. Uinta was a little slow in the hazy IPA game, but it's looking to get into the brut game toot-sweet. If you're not familiar with the style yet, Brut IPAs are just as they sound, bone dry. Most of the fermentable sugars are fermented out leaving a minimally sweet very hoppy and dry beer. Saddleback Brut IPA will likely be at session strength and will be available in 12 ounce cans.

Old Ephraim really has me excited. This beer is an Oud Bruin; basically it's a Belgian style sour brown ale. These typically have a dark fruit sour profile that I find to be the most enjoyable of sour styles. This beer will be in Uinta's corked and caged 750 milliliter bottles that are reserved only for the breweries funky and barrel sour beers. it will have an ABV of  6.7%.

Uinta also has an  "Oktoberfest style lager" coming out. I have no image for this other than a keg collar. This will be a high point offering that will hit at  5.3%. Still waiting to see if this will be packaged in cans or not. Stay close on this one as it's getting to ne the time of the year for this style of beer.

All of these may or may not be hit in the fourth quarter so be patient and i'll get the info on these as they get it to me.

Images found at Shipcomplient.com
Posted by Mikey at 4:17 AM