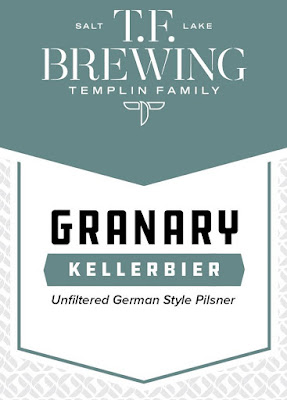 At Salt Lake City's up and coming Templin Family Brewery beers are fermenting away in the new brew house, slowly maturing for their late October - early November debut. Owner and brewmaster, Kevin Templin  has a full book of new recipes; perfected and ready for our eventual enjoyment.

If you're curious, I have a preview of a small sampling of what you can expect in the coming months.

First we'll start with the Granary Kellerbier (pictured above). Granery; named for the brewery's neighborhood - which is looking to become the city's new brewery district is the perfect name for one of Templin's first brews. The Kellerbier style is one of the older German styles, dating back to the Middle Ages. Look for unfiltered lager that's rich in vitamins from the yeast with an agressive hop profile and sessionable alcohol. This will be offered on draft and in 1 pint cans.

I'm pretty sure it's a 'beer sin' not to offer at least one IPA. One of T.F Brewing's first of likely many hoppy ales will be the Ferda DIPA. Ferda is named for a hockey term that has its origins in Canada. When someone does something for the benefit of his teammates or pals it's known as a Ferda. Templin Created Red Rock's popular Elephino DIPA; this will be different from that but familiar in the ways you'd expect from a double IPA. Ferda will be 8.2% and offered in 1 pint cans.

The third preview beer is for T.F.'s Albion Trippel. Named for Utah's Albion Basin; located up Little Cottonwood Canyon, this beer will be a Belgian style Trippel Ale that will posses all of the complexities you'd expect from this sweet, spicy and alcoholic strong ale. This beer will dial in at 10.2% and will find itself placed into 1 pint cans as well.

Our last beer is the Ethereal Leichte Weisse (basically light wheat). The overall character of this beer will be cleaner and softer on the palate with more subtle banana like phenols - and of course that lovely hints of lemon. look for it on draft and in - you guessed it, 1 pint cans.

These are a just a sample of what's to come and a good indication of what you can expect from SLC's newest beer spot. Stay close for updates on T.F.'s official opening.

Images found at Shipcomplient.com
Posted by Mikey at 5:12 AM