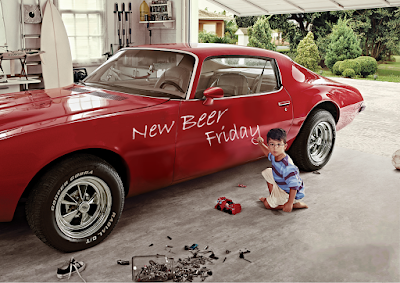 Shades - Kveik #9: This is similar to Shades' gold medal winning Kveik #1, however this one was made with Lemon Drop hops. Look for a little more lemon twang, it also slightly sweeter which gives it a little more balance between malt and tart. Very nice sour. 6.3%. Available at Shades.

Uinta - Elevated Red:  Brewer Brandon Kemmer said that being a California native who relocated to Utah, he wanted to brew a beer in tribute to the state of Utah and its red rocks to the south, and pine-filled mountains to the east. Brewed with piney hops and the addition of spruce tips add a slight piney flavor and aroma to this mild ale.

Saltfire - A Series of Singularities "Matuwhatka"- From Saltfire: If the Citra Ninja wandered about New Zealand and mistook some hop plants for blood enemies then the carnage left behind could only be the Motueka hop verital....varital...varietal! Damn it! Anyway. Announcing the next in our Singularity line of IPAs this citrusy (is that even a word?) hop with notes of tropical fruit from the islands down under is sure to throw a Shuriken blade into your frontal cortex. Doors open at 3pm

Wasatch West Coast IPA: Fruity aroma and taste with tangerine/orange being the most prominent. Isn't very fizzy as it goes down but it finishes smooth and very drinkable. Quite enjoyable and definitely a pick-up if you want a new IPA to try. 6.5% - Available to go in Park City only. Available to enjoy at all Wasatch/Squatters Locations.

Toasted Barrel BA Raspberry Porter: This is described as having a bit of barrel character, slight raspberry, and a bit of tartness, that balances it out more than bitterness. 6.7% - Limited at Toasted Barrel. starting tomorrow.