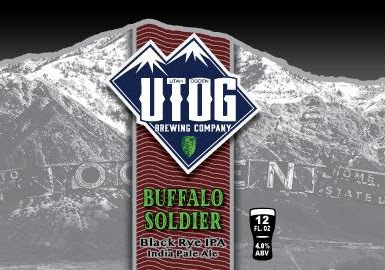 This New Brews Soon for You profiles what you can expect too see from what will be Ogden's and possibly Utah's next brewery. Utah Ogden (UTOG) Brewing Comapny will be a production brewery that will be located at 2331 Grant Avenue in Ogden, Utah. UTOG is piloted by Carson Foss who is one of the co-owners and will be the ventures head brewer. The brewery is expected to go online in the next few months and will offer a full ranger of high and low point beers. Look for a full service pub that will also have a kitchen that will feature in house designed dishes. Here's a tease of what you can expect from the brewhouse.

Pictured above is the Buffalo Soldier Black Rye IPA. This will be a 4.0% Percent offering that will showcase the IPAs dark side. I'm hoping for lots of rye in this one; looking forward to trying this on day 1.

Also at 4.0% is the Golden Grant Golden Ale. There are generally rounded and smooth ales that are easy-drinking beers have no particularly dominating malt or hop characteristics. This will likely feature an American hop varietal that will feature a flavor profile somewhere in the citrus to piney/floral range. So, think pale ale with a lighter color and and a less hearty malt profile.

The Wheat IPA or white IPA as they're sometimes called are an unfiltered style of ale that is light and cloudy in appearance due to the high level of wheat, and sometimes oats, used in the mash. Some versions are spiced like Belgian Witbiers with coriander, orange peel; others just rely on the the base malts and a butt load of hops. I'm curious to see which way way Carson goes with with this one. This will also dial in at 4.0%.

Finally, you gotta have an IPA; to start off, UTOG's IPA will be a  Session IPA. The umbrella is pretty broad and covers damn near every varity of IPAs under the session banner. This will likely fall under the the west coast style with citrus peel qualities combined with subtle pine to floral bitterness. This will also be available in draft and cans.

There are plans for higher ABV beers as well and I'll let you know what to expect on those as soon as they are formulated. With the current state of the Federal government's shut down it could be anyone guess on when we could see those. Stay close for more news on Utah Ogden Brewing and other new breweries that will be headed our way in 2019.

Images found at Shipcomplient.com
Posted by Mikey at 4:53 AM