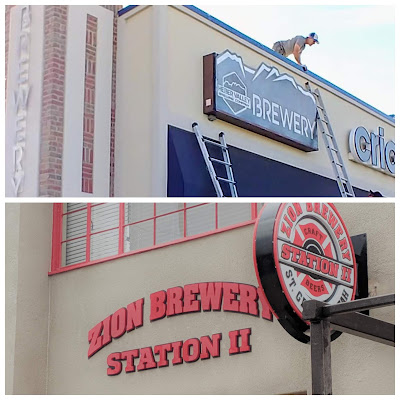 We've seen three new breweries open up in Utah so far in 2019; UTOG, Level Crossing and Strap Tank (Lehi). But 2019 isn't finished yet with new craft beer spots, many more are on deck waiting to serve up craft brewed suds to thirsty beer nerds. Here's a quick status update on what's coming up next.

Ogden River Brewing: Groundbreaking on Ogden's fifth brewery/brewpub will happen later this morning along the banks of the Ogden River. Located at 358 e. Park View Blvd. look for an early 2020 opening.

Bewilder Brewing: Construction is moving along at a fast pace. The brew system is in house and the boys are looking to get the taps flowing at years end.

Grid City Beer Works: Contractors have been at it for nearly a month turning the old Tile for Less building into a proper brewery. Grid City is looking towards an early 2020 debut. Located at 333 w. 2100 s. in South Salt Lake City.

Zion Canyon St. George: The remodel of the the old Fire Station #2 building in Saint George is moving along at a quick pace and it's looking like a late 2019, early 2020 opening for the second Saint George brewery. Located at 150 n. Main Street.

Helper Brewing Company: Just acquired property in downtown helper and will be looking to their begin remodeling in the coming weeks.

As more info comes in, we'll update you on these breweries and others as news comes in.