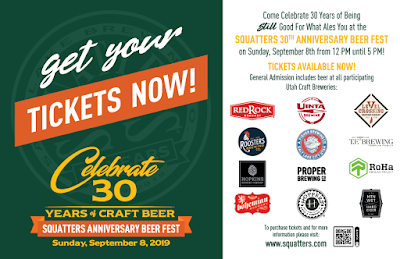 Thanks for your interest in the Squatters Trivia tickets for the 30th anniversary bash. We have our winner for this round. Congrats to Ally Aldrich for answering City Creek Pale Ale.

In an effort to say thank you to all of you Utah craft beer fans, I'd like to give you all a chance to win a couple of pairs of free general admission tickets to Squatters' 30th Anniversary Party that's happening on Sunday, September 8th from 12:00 PM to 5:00 PM (MDT).

All ticket holders will also have the unique opportunity to sample limited edition collaboration beers from Squatters and 11 participating breweries. For example, a Smoked Helles with fresh peaches will be available from Uinta Head Brewer, Patrick Bourque, and Squatters Brewer, Ryan Stambaugh; alongside a Cucumber Kettle Sour from Roosters Brewer, Jacquie King, and Squatters Director of Quality, Dave McKean. Details on more collaborations will be coming soon.

Squatters will release a special Rum Barrel-Aged Doppelbock, clocking in at 12.3% ABV in a 750-mL bomber bottle, to mark the occasion. Gracing the label of this specialty beer is an original piece of art by nationally syndicated and locally revered political cartoonist, Pat Bagley. VIP ticket holders will receive a bottle of this limited run brew featuring “Lady Li-Beer-Ty” (shown above) at the 30th Anniversary Beer Festival.

Okay, now that you've got the info on the party, let's get to the tickets. To try and keep the early  "googlers" from running away from the tickets, we'll make the Squatters trivia questions difficult, but not impossible. Trivia ends at 9pm 8/29 or until we have a winner. Here's the Question:

What was the name of the first beer that Squatters brewed back in 1989?

Please send your answer to utahbeer@gmail.com - I'll announce the winner for the first round of tickets on this week's New Beer Friday post. Good luck and cheers!

Pizza, because pizza is always the right answer for beer. Seriously, though, see you in the VIP? I've already got my tickets!

Hey Joe, you should get a special prize for pizza. And yes, see you there!