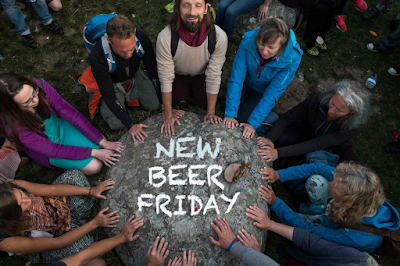 Tomorrow is the Summer Solstice - you'd never know it by the temperatures outside. I'm not complaining, this is damn near perfect weather for me. It's also excellent beer drinking weather too; warm enough for the light summer beer with enough evening chill to bring on the heavier beer cravings. Take a look at the list this week and you'll see it fits in perfectly to what I was just talking about.

Fisher - Bock: This beer was resurrected from Fisher's early 20th Century glory days. It's not an exact clone, but I trust Colby's brewing prowess to dial it in. It even comes in a retro looking Bock crowler.  5.0% - Available at Fisher.

Fisher - Plumango Sour: Very tart up front some nice mango notes. The plum gets a little lost in the base beer but it's overall a nice flavor combo that light and refreshing. Look for a malt sweet beer with with lighter alcohol than the typical bock. 5.0% In crowlers to go at Fisher.

Fisher - Staring into the Rye: There's a good dose of rye on top of a solid caramel base. Hops are herbal, sharp and balancing. Nice beer.  5.0% In crowlers to go at Fisher.

Shades -  PB&J: I was expecting a peanut butter bomb al la Belching Beaver, but the nut addition is pretty subtle. With a tart base beer - plus the addition of strawberry, think too much peanut butter would have made it a muddled mess. It's pretty drinkable considering what it is. 6.5% - Only a Shades.

Heber Valley - Mint n' Chocolate Stout: If you going to make a chocolate stout in the summer you'd better find a way to make it somewhat refreshing. The addition of mint may be the key. This is out now and only at the brewery in Heber. 5.0%

UTOG - Dry Bavarian Hefeweizen: They dialed down the sweetness a bit for this normally sweet wheatbier. It's time you experimented with the drier side of Hefes. 5.0% - only at UTOG.

Talisman - Adventures in IPA #6: This Juicy IPA was brewed with Citra, Amarillo and El Dorado hops. This will go fast! 5.0% - Available at Talisman.

Lone Pine - Oh-J: This double IPA has an opaque medium orange gold color with bright citrus aromas of orange and grapefruit. Vibrant orange and light citrus in the taste with spicy citrus rind. In the finish there's a nice lingering citrus twang. 8.1% Found at Slackwater.

Red Rock - Paardebloem: It's been about a year and a half since the last batch hit. This batch may be tough to obtain for home consumption, but I've been assured that there will be plenty going to the main brewpub and RR's restaurants to take care of the dine-in crowd. This year you can expect honey sweetness with peach, apricot and pear notes. There's a hint of funk and tartness lurking beneath the fruitiness. There's a good dose of bitterness from the greens as well. A sit warms the vinious aspe t from the barrel pop out. Finishes slightly warm and boozy. 9.2% Goes on sale Friday (today) in the restaurants, Saturday at the production brewery.

Proper - Recommend Rye: Continuing with their greatest hits, Proper is re-introducing another of it's OG beers. This week we return to Recommend Rye. This is a saison at it base with rye spiciness that compliments the esters the Belgian yeast creates. This is slightly tweaked from the last time you had it so it's time to schlep your ass over there and try out the new batch. 5.7% Only at Proper.

Epic/Commons - Common Interests:  You thought this collaboration beer between Epic and the now defunct Commons Brewing was all gone. Oh how wrong you were. There's a limited amount of crowlers available in SLC for this special foedered melon sour.  This has a light-straw color with just a hint of green in the highlights. Sweet honeydew rind, clean earth and oak hit the nose. The first sip is bright with citrus-tartness, lime and pith, that fades quickly to a cooling ripe-melon-sweetness with hints of cereal grain, tilled earth and root cellar. The effervescence lifts quickly off the palate taking the acidity but leaving hints of honeydew and the harvest season.