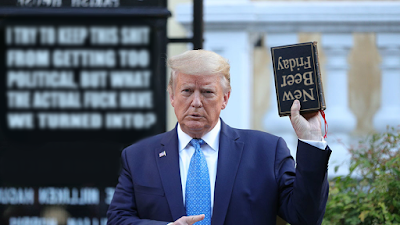 No matter where you fall in this long overdue societal upheaval; at least here, in this small corner of the interwebs, I think that we can all agree that craft beer is the unifying factor. And if we can all find common ground here, we can find it anywhere. So let's all unify around all of the liquid happiness we have swirling around us this week.

Shades - Pleasantly Pickled: The dill is of course most prominent. The pineapple is fairly subdued, with the chilies taking the rest of the load. This is quite different than many of the other kveiks that you've had from Shades and it's due to the low lactose levels and the intensity of the herbs and spices used. It's good on its own or as a cocktail mixer. Think: cheleda, bloody mary, margarita or as a pickle back. 6.5% - Only at Shades.

Cerveza Zólupez - Lager Mexicano: Before the pandemic Zólupez owner, Javier Chavez Jr. traveled to the city of Monterrey in Northern Mexico to make a collaborative beer with one of that regions premier brewers, Cerveceria Cabrito. Using Chavez's lager recipe they produced a classic Mexican lager. Ironically these lager have their roots in traditional German beers. This lager has a subtle malt profile with Saaz hops providing a slight zest. at 5.0% it's pleasantly dry and very crushable. This beer is just hitting the Ogden area and will so be in wide release.

Toasted Barrel - Pineapple Smoothie: Missed this one. However I understand this to be a barrel aged sour with the characteristics of of a kettle soured smoothie style ale. I'm very curious. Only at Toasted Barrel.

Bewilder - Mexican Lager: Sweet and grainy malts add a soft bread-like maltiness with a touch of toast. The hops are Nobel-like and add some nice grassiness and spice. Very drinkable on a warm June afternoon. 5.0% - Only at Bewilder.

Level Crossing - Berry Hazy: This is an American style pale, with a good amount of citrus qualities from the hops. The berry medley used adds a complimentary fruitiness that works extremely well with the base beer and it never falters until the end of the swig. 5.0% - Only at Level Crossing.

Four Peaks - Gilt Lifter: I don't know if this is the right style of beer (Scottish Ale) to take you into the low cal/carb game. There are some nice sugary notes but, you really want those big toffee flavors in styles like this. This more of a pool or recreating beer. 3.4% - Found at Harmons.

Great Divide Car Camper: Nice grapefruit notes, good aromatics with hint of dank bitterness detected. Dry hopped grapefruit is upfront and forward with some piney elements as well. The malt profile is light which makes the beer finish failed dry. Pretty good, you could kill a few of these no problem. 5.0% - Found at Harmons.

Deschutes - Lil' Squeezy: Citrusy hops with bread hops that creep into cracker territory. The taste starts somewhat herbal with some caramel and tropical fruits. Hints of citrus and melon with a long dry finish. 5.0% - found at Harmons.

New Belgium - VooDoo Ranger American Haze: Some star citrus fruitiness in the nose with some cereal like grains. The flavor follows with low bitterness. 5.0% - Found at Harmons.

Firestone Walker - Fly Jack: Herbal nose with some grapefruit. Upon first sip there's  lot of grapefruit, with some earthy hops as well. The flavor has more citrus hops with some lemongrass as well. Notes of pineapple linger towards the end. finishes with some orange pith. Another entry into the low-cal beer game.

TF - Who's Barry?: In this new iteration look for a slight reduction in lactose sweetness with an increase in overall berry fruitiness. Slightly more tannic which helps it keep that fresh fruitiness. The mouthfeel seems to have a creamier feel as well.

Hopkins Chile Mangose: This beer was originally made as a collaboration with Salt Flats for last year's Utah Brewers Guild Collaboration Festival. This version has been bumped up to 5.0%. The chilies provide more flavor than heat in this sour based beer. Ever tried mango dusted with chiles? it's very much like that; with less intensity. A wonderful beer. Only at Hopkins.

Hopkins also has a huge selection of small batch beers to offer this weekend.  Check these out! 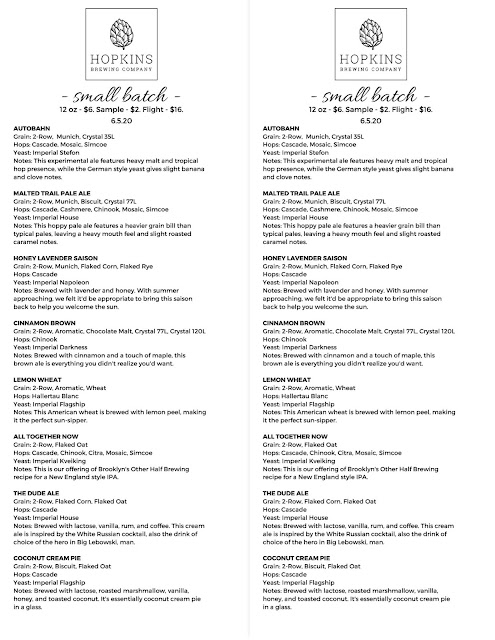