A Little Rye on Rye Action 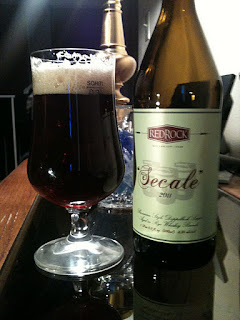 The Beer Yogi, Kevin Templin and the RedRock Crew have simply outdone themselves on their newest release, Secale (Se*ca"le).

This new creation is a 100% local collaboration between RedRock and the High West distillery. Secale, latin for rye is hybrid Dopple Bock/Rye Beer aged in High West Rye whiskey barrels for over three months. The combination of complementary styles and and wood character creates a beer full of personality and depth.

Pours a dark ruby color with a moderate two fingers of off-white head. The nose has a dry roasted malt aroma along with a light rye spiciness. It's rounded out with a mild caramel malt and vanilla aroma. The taste starts with Caramel malts and toffee. Chocolate covered raisins come next come next with a dry rye spiciness. Hints of vanilla and whiskey come next in the end, as well as a subdued hop bitterness that balances the malty sweetness in the finish. The body is full and the whiskey notes become a bit more pronounced as it warms. The 8.5% abv is well hidden but sneaks up you quickly.

This one damn fine lager. It has an outstanding aroma with a great taste and smoothness. It is a good traditional representation of the Bavarian style with a nice blend of rye malt - that is there, but not overly done - Traditional, yet unique. Highly recommended! In 500ml bottles. Available at starting today at RedRock locations. As always, call first.

A very nice brew, quite drinkable. I wish I could drink it out of a wooden keg into a liter Stein like they do in Germany!

great flavor but the one I had was flat maybe 2.0 vol co2

Fruity for a lager, like all their lagers..undercarbonation for sure. Is this bottle conditioned?

It's not bottle conditioned. I bought a case, all mine have the proper CO2. I guess there's an issue somewhere.