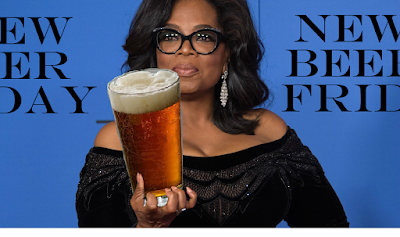 RoHa State Room Brew: This beer was done specially for The Stateroom, the local music venue in SLC.  It described as "combining all the essential beer flavors you need while dancing and listening to the show.  A nice bright red color with a subdued malt character and a hop flavor in the end enough to keep you drinking but not overpowering.  It has great balance to make sure it can quenches your thirst". Think of it as "Gig beer". 4.0% ABV. Only at RoHa and the State Room.


2 Row New Zeangland IIIPA: Yet another IPA is here from 2 Row this one is a Triple IPA made in the New England style with a variety of New Zealand hops (including Motueka), hence the name. It's described as having a "sweet light fruity aroma, flavor is the same with a dryer soft bitter finish". 10.1% ABV. This is available pretty much at any craft beer bar and of course at the brewery.

Mother Earth Four Seasons 2017 Winter BBA Brown Ale: From Mother Earth - "What started as an award winning Imperial Brown eventually made its way into Mother Earth's barrel program, thanks to a dependable base recipe and customer following, they decided to double mash it, which involves using wort instead of water to gain a higher ABV and more complex favor. Finally, they threw in some brown sugar to add a light molasses favor and age the beer in toasted oak barrels to create the perfect winter-warmer". 12.0% ABV. Available at the Beerhive, Beer Bar.

Strap Tank Barrel Aged Saison:  This Saison is described as having layers of farmhouse funk that complement perfectly the aromas and tannins of Cabernet from the barrel. At least one strain of Brettanomyces was picked up, created notes of barnyard funk, pineapple and hay that we couldn’t be happier to discover as we blended the final mix. Like a wine-beer hybrid, it pours apricot-orange with an off-white head. Balanced bitterness & healthily carbonated". 11.6% ABV, This beer goes on sale Saturday morning (1/13) at 11:00am. Only available at Strap Tank.

I know I missed something, help a brother out with the info!