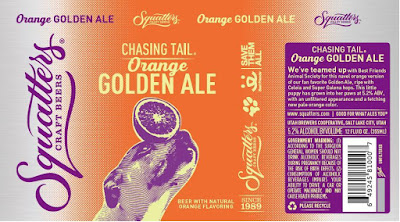 Squatters is teaming up with Best Friends Animal Society for this naval orange version of their Chasing Tail Pale Ale. Full of Celeia and Galena hops this hop forward unfiltered golden ale will push the limits of Chasing Tail's flavor profile. Besides 12 ounce cans this will have a limited run in Squatters' quart sized crowlers.

The ABV in Squatters Chasing Tail Orange Golden Ale gets a boost as well, now at 5.2% from the standard 4.0%. I'm guessing that a portion of the sales from this beer will go to Best Friends Animal Society.

Best Friends Animal Society is the only national animal welfare organization dedicated to ending the killing of dogs and cats in America’s shelters. To help Save Them All, Best Friends works with shelters, rescue groups and our members nationwide.

Sounds tasty, and they've got a great cause. stay close for it's release.

Image found at Shipcomplient.com
Posted by Mikey at 4:47 AM