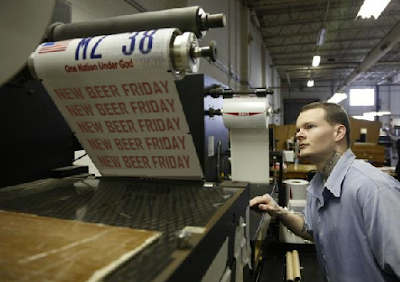 It's a 420 New Beer Friday! There's not a lot of 'dank' offerings this week; actually there's none. However, there are two beers out there designed to be swilled today. Lagunitas' Waldo and Stone's Enjoy By 4/20/18. These are 'special order' beers and are only available at your better beer pubs. Now that we got that out of the way, let's move on to New Beer Friday.

Today's options couldn't be more different, both in style and in taste. I think you will all be quite happy with what available.

Kiitos American Pilsner: This pils was made with mosaic and cascade hops. A far cry from the usual saaz people are used to. Pine and citrus aromas with light grains and a touch of grapefruit. The flavors start with lightly sweet grains and then citrusy hops with a moderate grapefruit rind bitterness blossom. This beer is hop forward but it has enough bread crumb and light grain malt flavors to knock off the rough edges. This beer is universally pleasing - everyone from classic lager lovers to hoppy pale ale people will like this. 4.0% - Available at Kiitos.

Epic Big Bad Baptist Reserve: Take one beer, make three different variants out of it, then blend them back into one beer. That's what you getting with the BBB Reserve. There were 110 cases made in SLC and there's no a 3 bottle limit. 11.7% Available at Epic's brewery bottle shop.

Epic RiNo Juicy American Pale Ale: The nose on this one (get it?) has big tangerine, lemon, peach and mango with lightly toasted biscuit. The taste follows with grapefruit, pineapple and mango. Some honey-like malt inserts itself at this point making the hop flavors seem more genuine. Next the more bittering qualities of the hops begin to show with citrus peel, light pine and herbal grasses. The finish has zero lingering bitterness with a hint of berry peel. Alcohol is nearly present. This is a brilliant APA. If you don't love this as much as I do we're going to have to start seeing other people. 5.8% - Available at Epic's brewery bottle shop.

Proper Black and Blue Skittlebrau:  A very nice looking fuchsia color. Lots of tart berries surround a nice saison base. If your not a huge fan of fruit beers I think you might dig this one. 4.0% - Available at Proper Brewing.

Ballast Point Aloha Sculpin: Some nice tropical fruit notes on the nose like lemon, grapefruit, tangerine, and peach. It starts with marmalade and dry crackers up front, then sharp lemon, grapefruit, and orange. Next there's a bit of berry - this sweetness transitions to pineapple, guava, and grapefruit to round round it out. It finishes somewhat dry with a clean bitterness. This is nice, but I'd probably take the Grapefruit Sculpin over this one. 7.0% - Available at DABC stores and better beer pubs.

Anchor San Franpsycho  IPA: This beer was just released last week and it's already on shelves which means it very fresh. Not tried it yet. 6.3% Available at DABC stores.

Stone/NOFX Punk in Drublic: The aroma is a little herbal, spicy florals with a touch of citrus. The taste is doughy and bitter with grassy German hops and orange peel. Some sulfur in the finish. A light and refreshing helles lager. 5.8% Available at the Bayou.

Stone Totalitarian: Have not tried this Imperial Stout. 10.6% Available at the Bayou

Coronado Stingray DIPA: Have not tried this. 10.6% Available at the Beer Bar

Coronado Guava Islander: Again, this is a nice fruited IPA that has subtle fruitiness allow the base beer to still shine. 7.0% Available at the Beer Bar.