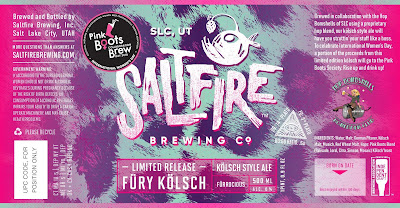 Today in New Brews Soon for You we have a diverse crowd of options coming from many different breweries. Some are coming quite soon while others are still a little ways down the road.

Pictured above is a collaboration beer from Saltfire Brewing and SLC's bad-ass ladies home brew club, the Hop Bombshells. The beer was brewed last weekend and will be one of Saltfire's initial offerings. It's nice to see Saltfire hitting the ground early with a collaboration beer. The beer will be a 6.0% Kolsch called 'Fury' and a portion of the proceeds will go towards the Pink Boots Society.

Uinta Brewing has a new 25th anniversary beer headed our way as well. In the past, Uinta has been releasing a series of fruited sour ales under their 'Birthday Suit' label. This beer will be an Imperial Pilsner that will clock in at 7.5% ABV. You may recall that Uinta made a 9.0% imperial pilsner a few years back called Tilted Smile. I doubt this is the same beer. Look for it in 22 ounce bottles.

2 Row Brewing will soon be releasing a barrel aged version of their Dangereux Farmhouse Ale. This incarnation will be brett soured and aged in white wine barrels. Luckily for you, this beer will be coming sooner than later, with release scheduled in the next 30 days. This will be a very limited release. 10.4% ABV.

Finally we have a new Belgian style ale from Salt Flats Brewing. Midnight Run will be a Belgian Dubble Ale. Look for a rich malty beer with some spicy / phenolic yeast notes and mild alcoholic characteristics. This beer will have a wholly appropriate ABV of  9.0%.

All of these beers are still in their development phases and like all beers will be ready - when they're ready. As always I'll give you a heads up on when they'll hit.

Speaking of  a 'heads-up" I promised release dates for previous New Brews Soon for You beers. Today, Epic Brewing will be releasing their RiNo Pale Ale in SLC. This beer will debut here in 22 ounce bottle at first then transition into 12 cans by the end of May.

Also from Epic: Big Bad Baptist Reserve will go on sale this Friday. This beer is a special blend of the previous releases of Big Bad Baptist, Big Bad Baptista and Triple Barrel Big Bad Baptist. This will be a very limited release. I'll have tasting notes on both beers in this week's New Beer Friday.

If you're talking about Cerberus, that's not until the 27th.

Any new on when SaltFire is opening?

@Ryan Not yet, they're busy building inventory. Probably another 5 weeks or so.