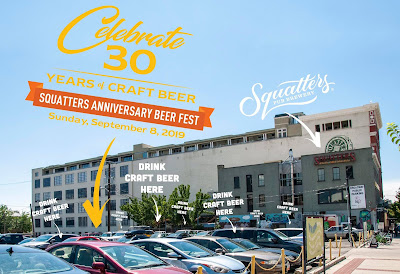 I have two more general admission tickets to give away to this Sunday's Squatters 30th Anniversary Party. I thought last week's question was pretty tough, but the beer nerds of Utah proved me wrong, yet again.

In case you missed the answer to last week's question, "what was Squatters' first beer"? It was City Creek Pale Ale.

Who was the first brewer at Squatters?

Email your answer to utahbeer@gmail.com - I'll announce the winner this evening, Tuesday 9/3. If you don't get a reply from me then you probably didn't win.

Cheers and good luck!
Posted by Mikey at 5:57 AM