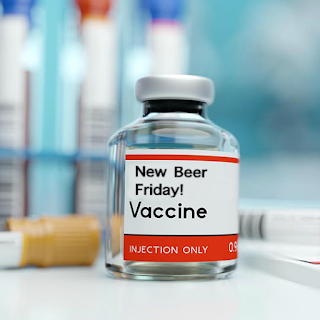 There a massive selection of beers for you this week and we've got the antidote to your COVID blues. Strap-in this is going to be a long, New Beer Friday.

Saltfire - A Series of Singularities: Nelson Sauvin: Plenty of caramel sweetness, layered with white wine grapes, lychee and a fair amount of spiciness. A substantial malt base, after which comes the expected dry, white-wine, gooseberry and melon flavor from the Nelson Sauvin hops. Finishes dry with substantial, but not overwhelming bitterness. A very nice single hop IPA. 7.1% - Available at Saltfire.

Saltfire - Mobius Trip - Non Sequitur: This is a mixed culture kettle sour. Mobiles Trip is typically made with funkier yeasts. This version is made with peaches. For a kettle sour, this one isn't 'break your jaw' sour. There's notes of lime peel up front. It's unexpected and pleasant. Next come the peach; it's comes off as green and unripened due to the base beer. The date on the bottle says 8/25/20 it's like 9/25/20. 7.3% - available today at Saltfire.

Desert Edge - Game Day Red: This is a little more subtle than an amber ale – not a caramel forward. the medium amount of malt sweetness met with mostly orange peel and pine with some floral notes in the finish. It has a nice old school 90s feel. 5.0% - only at Desert Edge.

Heber Valley - The Grunge IPA: I hate living so far from this brewery, because they're cranking-out some really good stuff. If you have any tasting notes on this new release please share them here. This was made with locally grown hops from Heber, UT (I assume). 5.0% only at Heber Valley Brewing.

RoHa -Rose Wild Beer: Named for Betty White's character, Rose from the Golden Girls  – The base beer here is Maltese Cross, that's been fermenting on 100% brett for most of COVID. The nose is hoppy, with some dark fruits and barnyard funk. the taste is much more malty than the nose led me to believe. There's some minor berry and melon notes with some moist cake. It's really easy on the palate. Towards the finish you get some fink and woody notes. A nice, young, brett beer. 5.0% Available at RoHa in crowlers to-go only.

Shades/TF - Strawberry Rhubarb Pie: Brewed with their pals at TF Brewing this is a nice subtle beer. It's got strawberry for sure, the rhubarb part gets a little lost in the base kveik beer; it doesn't really matter because it all comes off as the same. It's  not cloying at all and the graham cracker is complimentary and not in your face. 6.5% - Available at Shades and better beer pubs around the Wasatch Front.

Shades/Three Monkeys Beer - Bad Habits: Never heard of Three Monkeys Beer? Not surprising,  they're out of Rio de Janero and they've collaborated on an American Style Sour ale made with mango and lactose. This is quite creamy, the mango is nicely mellow. It brings up the drinkanbility a lot. The lactose isn't cloying either, so you get a nice, well round drinking experience. Very nice. 6.5% Available at Shades and better beer pubs around the Wasatch Front.

Shades/Uinta - Kveik Nosh: This a part Hop Nosh - part Kveik sour and part juice beer. It comes across as dryer west coast sour. the base beer isn't too tart, and it helps to prep the palate for the dose of grapefruit juice coming your way. It's  not overpower by any means but you can defiantly taste the difference between hops trying to taste like grapefruit and real thing. A very nice nice and unique IPA. 6.5% At Shades starting 9/26/20.

Wasatch - Juicy 074: This is an experimental hop IPA

Mike Hess - Hop Cloud: Floral aroma with equal parts mango and pineapple right up front, then a rush of pure orange peel. Low bitterness, as this is a NEIPA. And yes, there's plenty of haze if rouse the can. 7.0% - Found at Slackwater Sandy.

Cascade - Valley Flora: This 2017 vintage has a heavy vinous profile with cherry and plum. Vinegar towards the end; dryer than balsamic with a scratchy finish. Made with Pino Noir grapes. 10.0% - Found a Beer Bar.

Cascade - Cuvee Du Jongleur: This is a blend of Belgian reds, tripels and and quade ales aged in oak casks. Sour cherries, balsamic vinegar, some sugar and cake batter. It has the lactic classic red malt that Flanders Reds are known for, oak and acid are clear. Adds some more complexity with some Belgian malt and ester flavors, notes of fruit - lemon and tangerine in there as well. 8.4% - Found at Beer Bar

Sawtooth - Free Solo: This is branded as a hazy Single hop IPA made with BRU-1 hops. I'm not really familiar with this newer hop strain. They're said to contribute notes of pineapple and stone fruit, that is backed with a soft spiciness. We shall see. 4.9% Found at Harmons

Uinta - Sea Legs: This initially debuted in December 2012 and was supposed to be a one-off. Well it's back in a far more manageable 12 ounce bottle (formerly 750ml). It pours a very murky, dark brown, almost black color with a small tan head. The nose is brilliant! full of toffee with some chocolate biscotti, a hint of Bourbon and espresso. The taste starts with sweet chocolate with some biscuity malt flavors. A bit of dark fruits with vanilla and subtle whiskey come next with a bit of dark chocolate and toffee in the finish. The alcohol is well hidden in this 8% beer.

Fisher - Beet Saison: Fisher's infamous beet infused beer is back for a limited time. Super earthy with medium sweetness. The saison part is very light with hints of clove and white pepper.  5.0% - only at Fisher.

Roosters - Cosmic Autumn Rebellion: To give credit where credit is due, this is the original locally made Pumpkin chocolate chip cookie beer. Pumpkin spice aroma with cocoa. The taste is pumpkin spices dough and chocolates. Reminds me very much of those chocolate chip pumpkin cookies. 6.0% Available at all Rosters Locations.

Some tasty treats for this week! Cheers and Happy Birthday Mikey!

The Grunge IPA from Heber Valley smells like teen spirt, has a soft mouthfeel like a flannel shirt but with a kick at the end like a combat boot, yeeaahhh. JK I haven't tried it yet but will be going up today excited for this one. Also Happy Birthday Mikey!

Thanx, this is very Informational Post to Read now I am Waiting for your next post
Soju