It's another solid line up from local breweries this week. However, if you subscribe to the vegan lifestyle, take note that there's a more than a few options that may not jive with your lifestyle.

Saltfire - Los Braceros: Smells heavily of sweet grains and malts with some spicy, grassy hoppiness in the background. For the style, happy to have some hint of hops on the nose. Tastes similar to the nose. Buttery toffee and roasted, sweet grains up front with a bitter hop, crisp and dry hop finish. 5.5% -Available at Saltfire

Shades/Purgatory - El Papi: This beer is based on the Purgatory cocktail. Margarita-like aroma with hints of chilies and basil. The taste is the same. Agave sweetness works well against the sour base beer. the basil subtle and the jalapeno is heat is light. 5.6% This one goes on sale Saturday 10/3  Not Vegan Friendly

Shades/Edge Brewing - Guavalicious: Made with Boise's Edge Brewing. This beer has a big guava nose with hints of vanilla. The taste follows with fresh guava that is light and it compliments the base kveik beer. A nice fruity beer, with high drinkabilty.  5.6% - Available at Shades now. Not Vegan Friendly

Shades/Slackwater - Beautiful Disaster: This cream ale has a more brown hue due to the cocoa nibs. The nose is big with hazelnut and chocolate. The taste is basically Nutella with light banana. The banana is real banana and not estery yeast flavor. The whole package is very dessert-like. 5.6% - Available at Shades now. Not Vegan Friendly

Toasted Barrel - Pina Colada Triple Milkshake IPA: Big flavors of pineapple and coconut dominate with vanilla and citrus coming in next. There's some floral bitterness floating around in the background with the big 10.5% stays relatively hidden. Tasty stuff. Only at Toasted Barrel. Not Vegan Friendly

Level Crossing - Astro Shake: The nose is hoppy, malty, with nice orange, tangerine, grapefruit and guava The taste is nice with a surprising amount of hops coming though the lactose addition. There's a nice citrus blend of orange, tangerine and grapefruit. Guava -like flavors show up as well with a nice pine bitterness in the finish. the 7.7% ABV. Overall, a tasty brew. available  starting today at Level Crossing. Not Vegan Friendly

Hopkins - Deseret Dunkle: Look for slight banana with a deep sweet bready smell and some burnt sugars and raisins. Sweet breadiness light bits of clove and banana lights bits of caramel and toffee on the end a little honey. 5.0% - Available at Hopkins.

Bewilder - Pumpkin Mild: This spice beer is is full of cinnamon, nutmeg and allspice. There's a nice amount of malt sweetness as well. This comes across more as a gingerbread cookie to me. Good stuff. 5.0% - only at Bewilder.

Bewilder - Raspberry Golden Sour: Made with fresh local raspberries and you can tell. The berries are fresh as hell tasting and the base sour ale is has medium to low tartness. Very nice stuff. 4.7% - only at Bewilder.

Bewilder SMaSH Pale: Hopped with Amarillo, this is a pleasant and highly drinkable pale ale full of citrus peel notes and bitterness. Tasty stuff. 5.0% - only at Bewilder.

Kiitos - Pomegranate Gose: This is part of Kiitos' 3rd Anniversary party this weekend. It will be released on Saturday.

Kiitos - Autumn Haze: This is part of Kiitos' 3rd Anniversary party this weekend. It will be released on Saturday.

Kiitos - Barrel Aged Coconut Stout: This is part of Kiitos' 3rd Anniversary party this weekend. It will be released on Saturday.

Fisher - Peaceful Transition: Hoppy with a lot of pine. Some grapefruit and floral notes in the nose as well. Grapefruit is stronger than in the nose. Pine notes as well as vague citrus. Good stuff. 5.0% - Available at Fisher

Mare Island - Fog Bell: This hazy is a new release from Mare Island. There a nice tropical aroma, just as you'd expect from the style . Flavors are mostly pineapple and citrus with minor pithy flavors. It's got a bit of bitterness which may throw some of you off. Overall a nice beer – not quite to style. 6.3% Found at Beerhive. 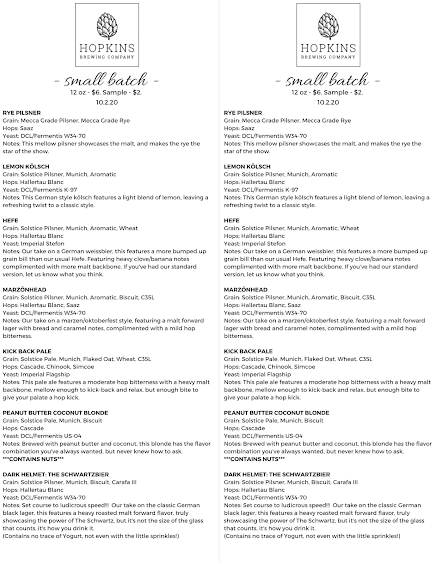