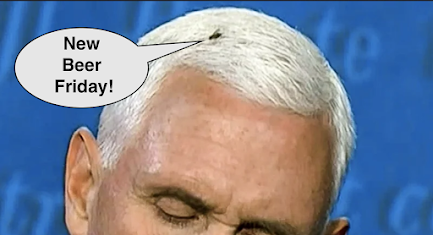 There's no debating that this week's New Beer Friday will Fly above expectations. We have a couple of anniversary beers and a mandatory dose of hop forward ales.

Shades/Beer Bar - Kveik Sunrise: Orange dominates the nose and the beginning of the the first swig. It's natural OJ, not flavoring; you can tell by the way the citric acid lights up the taste buds. Cherry and agave add some minor nutty notes. Would work well tequila or rum. 6.5% - Available at Shades and Beer Bar. Not Vegan Friendly

Shades - Ten Year Anniversary: To celebrate 10 years, Shades will be debuting a big Triple IPA. This beer features, 10 pounds of 10 different hops per barrel – consisting of: Amarillo, Citra, Cascade, Comet, Centennial, Mosaic, Motueka, Galaxy, El Dorado and Huell Melon. The result is a highly resinous IPA that's tropical fruit forward with a helthy dose of pine. There's a good amount of bitterness, but considering all of the hops were added in the whirlpool and dryhopping, it's pretty mellow considering the hop bill. Some alcohol heat in the finish. 10.0% - Available at Shades on  Saturday 10/10. Are you sensing a theme here???

TF Brewing - Triple Oated Imperial IPA: Pours a fairly turbid yellow-orange body with a one finger white head. Aromas of grapefruit zest and orange pulp, touch of floral as well. Minimal malt sweetness is evident at first. Flavor is similar to some of Templin's other offerings; with a more pronounced grapefruit skin zestiness lingering on the finish. Mouthfeel is a solid medium with a super creamy body – due to the huge amount of oats. Overall bitterness is low. 8.5% - Available at TF starting today.

Red Rock - Saison Rosé: This part of Red Rock's new Back Door Series (quit snickering Mick and Allen) and is exclusive to Red Rock's downtown brewpub. This debut beer from brewer, Chris Harlin is a saison, fermented with brettaanomyces with chardonnay must, hibiscus and raspberry. The flavor is slightly funky due to the immature age of the ale. The berry is nice and round as the hibiscus and brett add some countering tartness. This is a complex, yet refreshing ale that really stands out this week. 6.9% - Available Saturday 10/10 in 22 ounce bottles. If you want it to-go, you must go to the brewery's back door (get it) to purchase it, not the main door.

Upslope - Spruce Tip IPA: This comes off as holiday beer; at the very least it's a cool weather beer. Citrus and pine in the aroma for sure. The body seems pretty full for an IPA, but it does deliver on the spruce. It's nice and sappy/resiny. This is a limited release, when these are gone, they're gone til next year. 7.5% - Found at DABC

Dogfish Head -  Campfire Amplifier: This beer has only been for sale across the country for about a week. And you've already got access to it.  This is a Milk Stout that has S'more flavors added; brewed with marshmallows, graham crackers, cocoa nibs, cinnamon, Madagascar vanilla beans and smoked malt. 6.5% - Found at DABC Not Vegan Friendly

Roadhouse - Trout Whistle: Missed this one. 6.0% Spotted at Slackwater in Sandy.

RoHa - Pumpkin Black Ale: Smells of cocoa and pumpkin spices. The taste follows with milk chocolate, nutmeg and allspice. Very dessert-like with a fair amount of body for a 5.0% ABV beer. Available at RoHa Brewing Project.

Fisher - Intermountain Juice: This returning favorite is a wet hopped beer made with 100 lbs of fresh picked Idaho 7. Look for big flavors of citrus peel, melon and grasses. 5.0% - Available at Fisher.

Thanks for doing these. I still check in every week. TF also has their Oktoberfest going on with a variety of german beer tap offerings as well as a doppelbock that is very smooth. My favorite is the festbier.
What happens when blogspot goes away?

Thanks Josh. I’m looking at another template to move to. Blogger has so easy; never thought google would unload it, so I’m looking for something I can transfer my archives to. I’m open to suggestions for sure.

I am no expert, but it sounds like wordpress is the most likely candidate. I think you can transfer your current site there and its pretty simple.

The big issues with Wordpress revolve around security issues. Given it's proliferation across DIY websites and storefronts, it tends to be a big target for hacks. You certainly don't store or use any private info, so that's not a concern, but you don't want to end up hosting a phishing site by accident. So if you go the WP route, make sure that the provider you're using is really good at keeping the software updated, and ideally they run behind a good Web Application Firewall (WAF) like CloudFlare or the like. That should help keep things more secure.