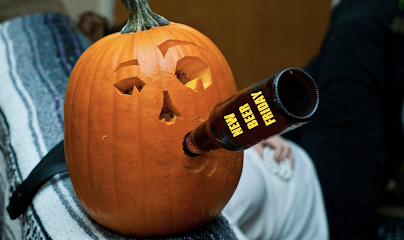 Hear that? that's the sound of very few kids pounding at your front door. We all know the only pounding this weekend will be the slamming of drams on your over-taxed counter tops. Please keep it in check though, those little shits have devious parents that are just as devious as you once were. Happy Boo Beer...er New Brewery Friday!
Ogden River - Aviator American Wheat: We have a new brewery! Ogden River Brewing is the culmination of many beer dreams, but none more than Pat Wonslow's. Pat's first beer has a nice toasty wheat base with  a subtle amount of toast that carries a bit of coriander and orange peel beneath.It not quite into Witbier territory, but it gets the point across with out being overbearing.  Solid and highly drinkable at 5.0% - Only at Ogden River.
Ogden River - Hop Train: A straight up American Pale Ale with medium to light malts and a slightly over balanced hop bill. This is not trying to be an IPA dressed as a pale ale, it's a tight easy drinking beer with no frills. 5.0% - Only at Ogden River.
Ogden River - Union Station Amber: This takes a slight turn towards hoppy-side. It's all about the malt upfront, but then it goes into pale ale territory, offering up a slightly exaggerated hop bite that is less better and more snappy. very quantifiable at 5.0% - Only at Ogden River.
Ogden River - Jacob's Bogie Scottish Ale: This one hit after I got my samplings.Look for a high malt profile with hints of peaty smoke. Just hints. 5.0% Only at Ogden River.
Ogden River/Bewilder - Patersbier: From the start clove drives the flavors here. Some esters from ythe yeast creat a vague fruitiness with honey malts driving the base beer. The yeast also offers a bit of white pepper, which helps it drive to a dry finish. This is quite a assertive 'father's beer' peppery dry. 5.0% Only at Ogden River and Bewilder.
Bewilder - Mole' Porter: This has a solid Porter body without a doubt. There is a bit of chocolate and maple up front. Those flavors give way to chili, cinnamon and peppers. Not much heat – butr the mole spects drive you to the finish.This is Bewilder's first beer above draft level and it hits at 6.0% and it will go one sale this Saturday.
Salt Flats - Barrel-aged Low Rider: Aged in Salt Flat's Bonneville Bourbon barrels. This chocolate forward ale will beat your ass if your not careful. Massive amounts of milk chocolate dominate, until the wicked bourbon and rye attack turning this into a decadent witches brew. This is not for the meek. For a barrel-aged beer this is the best bang for your buck, I promise. At 10.5% this will light up any evening, in or out of the house. 10.5% - at Salt Flats today.
Hopkins - You can't Do That On Television IPA: This is a throwback to American IPAs from 20 years ago, this beer features caramel malts (from Solstice Malts), a firm bitterness and a piney citrus dry hop profile from Chinook, Citra and Simcoe. 5.0% - Only at Hopkins.
Potosi - Rosa Stiefel: This is a Pink Boots collaboration beer that emulates a Euro- Grapefruit Hefewezen.  This comes across as a radlerbeir without all of the sweet soda. High on Fruity flavor – low in beer difficulty. It's a guilty pleasure for sure at 4.5% Found at Slackwater in Sandy.
Check us out at 9:20am-ish on KBER 101 as Mick, Allen and myself dissect all of these and other beers on the New Beer Friday – KBER edition.
Here's this week's small batch beers from Hopkins Brewing. Click for a larger image.