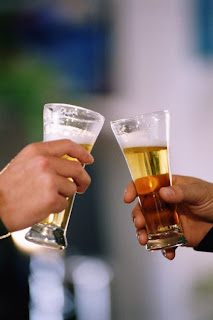 For most of my adult drinking life Uinta Brewing's beers have been a staple in my fridge. I'm quite fond of most of their beers and I'm quick to pimp them to whom ever will listen. Well stand by for some pimpin' especially if you live in Georgia or Colorado. Uinta has had a great year so far, expanding into the east coast and most recently into one of the more competitive craft brew markets in the country. Brewing is big business in Colorado, it's currently home to 24 breweries(including Coors) and 72 brew pubs! Colorado is serious about their beer. The state ranks number one in terms of gross beer production, producing over 23,370,848 barrels in 2006. That being said, it's no easy thing to break into a market with such stiff local competition. Add in the fact that a good majority of Uinta's line will be at 4.0% abv, you've got yourself a tough task. It's tough enough around here for people to get past the Utah beer stigma, hopefully Colorado beer lovers will be more open-minded.

And as we give we also get to take. In this case a long time bootlegging favorite of many Utah craft brew lovers finally comes to our stores legally. Big Sky Brewing out of Missoula has started shipping Moose Drool Brown Ale, Scape Goat Pale Ale and it's Big Sky IPA. I spoke with the brewery this morning. They said they shipped out an order last week, so we should see bottles in our liquor stores with in the week. Hopefully! Things aren't exactly swift over there at the DABC. If you see them let us know where. Cheers!
Posted by Mikey at 4:40 AM

CO is heaven to any beer lover that's for sure. But I don't think being 4% will hurt Uninta all that much. Although, CO is not a control state 4% is the limit to be sold in grocery stores and the like. That may hurt there sales where the beer snobs buy (L stores that sell by the bottle) but I would think the vast majority of the market buys at the grocery store.

Finally some new beers in Utah hopefully. The line up at the state stores almost never changes, which sucks. Seasonals come and go, but new beers are never seen. Big Sky will be a welcome addition. How about Ale Smith, Deschutes, or even carrying more local beers. Why the hell do they only carry locals that are over 4%? I have to buy six polygamy porters if I want just one.

lol one polygamy porter? good one. im excited to taste the moose drool though.