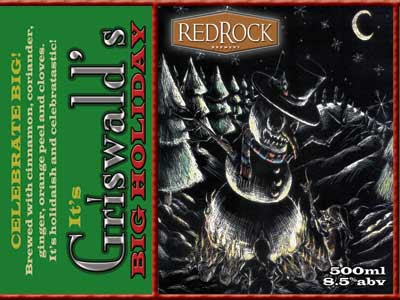 It might seem a little early to be talking about Holiday beers, but if you take a look outside you realize that the holidays are not too far off.

So here in the waning days of October we offer you, your first glimpse of some winter warmers, alla Utah.

The first beer announced is from RedRock Brewing Company's Beer Yogi, Kevin Templin. The name may be somewhat familiar but this is an entirely new beer. As the name implies, Griswald's Big Holiday is bigger version of Redrock's Holiday staple Griswald's Holiday Ale.

The original Griswald's poured a clear golden amber color with a nose is mostly of nutmeg and cloves and a touch of maltiness beneath. The taste started big and malty then the spices kick in. Nutmeg and Clove were very pronounced then transitions into a Cinnamon spiciness. The finish was bright and piney.

I assume Griswald's Big Holiday will be similar in taste except with a 8.5% abv punch. It should be available the week of November 15th and will be around 'till it ain't.

There are more holiday beers coming down the pike, but I ain't allowed to talk 'bout 'em yet! Stay tuned.

Isowha? I expect xmas in a bottle...maybe some candycane and worn out panties. Nutmeg is dangerous.n psychedelic...Ohwowooo, halloween plus thnxgiving equaps big red drunk gnome with a pine tree day, my kids love him. Griswalts holiday likes lots of lightening,allover...budlight being the best, I hear it may contain
Wormwood and blueberries as antioxidant, cool.