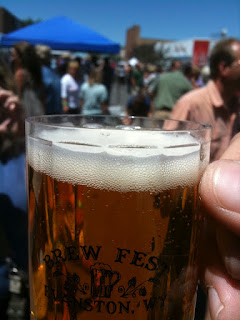 We Utahans have some great neighbors. When they throw parties, we're always invited. For July our neighbors in Evanston, Wy have invited us to the their 4th Annual Brew Fest. Every year it gets bigger and this year's event nearly doubles previous ones.

There is also a Home Brew competition. I'm trying to get the info for those you that would like to enter and will have it for you, ASAP.

So plan on Saturday, July 21, 2012 from Noon to 5pm. There are plenty of "after parties" taking place at surrounding bars and taverns in the area. The cost is $25 for unlimited pours. Advanced tickets can be purchased here.

Below is a list of the breweries that will be pouring. If you haven't checked out this fest, it's well worth the short drive.

Photo: Berrill Maker
Posted by Mikey at 7:18 AM

Even if you don't partake it's some seriously great people watching.

Stoked to see a berrillmaker shout on utahbeer. We read your blog daily. Keep up the excellent work Mikey!

We went last year and it was awesome. My wife actually prefers it to the GABF. I like the GABF better but this one is a lot of fun. It has a small town carnival kind of feel to it but at the same time they have a great beer selection.

Re the homebrew competition, unless things have changed since late May, they're not planning on having one this year. I reached out to one of the members of the planning committee and he said they haven't had a competition since the first year. I told him a lot of Utah homebrewers would be interested in a comp, so hopefully they'll do one next year.