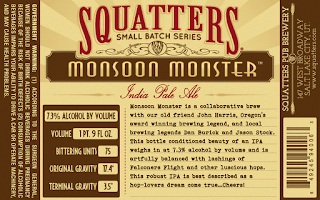 After a huge beer news drought we finally have a little monsoon action to wet our appetites. The latest in Squatters' Small Batch series is called Monsoon Monster.

Monsoon Madness is an American IPA made with a new variety of hops called Falconer’s Flight. These are an exclusive proprietary hop blend created to honor and support the legacy of Northwest brewing legend, Glen Hay Falconer. Falconer’s Flight are comprised of many of the Northwest’s most unique hop varieties and is perfect for any Northwest-style IPA. Each hop has been hand selected for its superior aromatic qualities, imparting distinct tropical, citrus, floral, lemon and grapefruit tones. Coming in at 75 IBU's this will likely not disappoint area hop heads.

Should be out later in the week or early next week. We'll of course give you all the info. Thanks for hanging in there!

Our latest, Monsoon Monster will be released on August 2nd which is National IPA Day.

Squatters Pubs said...
This comment has been removed by the author.
2:31 PM

Hope we can see some in texas! It sure is rainin here.

Hope we can see some in texas! It sure is rainin here.