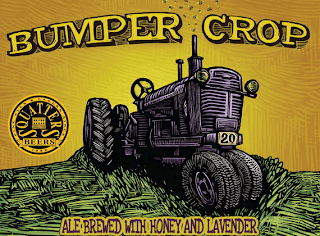 If you missed out on the release of Squatters' Bumper Crop Honey Lavender Ale last month, you've got a second chance.

Squatters' has released a limited batch on draft because of it's popularity. The original beer came in at 5.5% ABV, this one is 4.0% ABV. Bumper Crop is a Honey Ale, made with fresh Lavender. The nose is big with honey and lavender. The taste is the same, but a little more subdued with hints of nutmeg and clove.

It's on tap now until it's gone - only at Squatters Downtown Location.

Yeah, that story is from last week. They'll likely not allow the brewery to encroach onto Edison.

This article is terrible.

Nobody showed up from the "pro" side of the argument. I didn't even know this was happening.

The concept of a neighborhood watering hole that's a walkable distance from a patrons home is too much of wildcard I guess.

Well how did the zealots find out? Sounds fishy to me. Things here can be frustrating as hell.

Next time we are on the agenda we will let you know; would love some support at the meeting. The city changed the meeting date at least once on us. The ring leader against our proposal does not even live on Edison but does work for the city!!! We love Edison, want the best for all of our neighbors (near and far) and are willing to make our direct neighbors and the City happy with a plan that covers the concerns. It is a pity that by being flexible and willing to work with ALL STAKE HOLDERS that we get labeled as wishy-washy evil doers. Good old Utah, damned if you do damned if you don't and for sure going to heck if beer is involved.

This bias of these statements are so obvious. How about detailing how many jobs Epic has created, how much money in taxes, etc. They are in a frankly blighted and poor area bringing in jobs and growth during the worst recession since the 1930s-40s.

Douglas,
What you say is true but then why is Epic building a new brewery in Colorado instead of here in Utah?