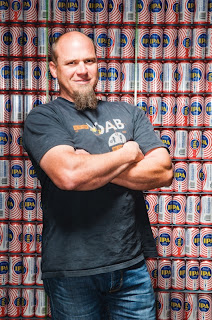 There's a lot of beer stuff going on in Arches Country, so we'll cut the crap and get right to it.

Moab's Brewmaster Jeff Van Horn has been teasing us all with hints of new beers for quite a while, now it looks like he'll be able to deliver on his promises. We'll start with what's happening now and move on from there.

Moab has been planning on re-releasing their Deadhorse Amber Ale in their popular 16oz. cans for quite some time. These 4% beers should be hitting store shelves any day now.

JV and the crew have also canned Johnny's IPA at 7% and the Rocket Bike at 5.5%. They are available at the restaurant and the brewery's bottle shop. The high gravity Deadhorse is still in development.

These will be shipping to Boise, Idaho this week but none will be headed to Utah's Liquor Stores. The DABC has opted  not to carry them, so Moab is the only place in Utah you can buy them. I urge you all to call or write the DABC & help change this. It's bullshit that you should have to visit a neighboring state to drink a locally made beer. In the meantime, they will be expanding into Arizona by the end of the year, then in to Nevada.

In the next two weeks the next addition to Moab's Desert Select Series is due out. The Hopped Rye will be released at the brewery and (this is for you Douglas) the Export Stout will be available around the first of the year. Again, only in Moab.

The Hopped Rye will be in the massive 1 liter flip tops, but it will be the last. The brewery is expecting new .5 liter bottles in December from Italy. They are still flip-top style bottles as well. The Export Stout will be the first Desert Select Series beer in the .5 liter bottle, then they will change out the Imperial Black IPA, Triple & Scotch Ale to the new bottles.

To produce all these new beers, the installation of an additional four - 30Bbl fermenters is happening in the next couple of weeks, this will bring their annual production capacity up around 10,000Bbls.

Me thinks a Moab day trip is on the horizon.

Photo: Slug Magazine/Chad Kirkland
Posted by Mikey at 6:58 AM

Very cool news. I wish Moab would stop reusing the same names for all their beers though! 3 Rocket Bikes....yikes! Now, I wanna know specifically who decides at the state owned monopoly what beers I get to try. Specifically what Department or people. Also, on what criteria? Moab Brewing is well established and their products are high quality. The DABC is a big bureaucracy, I want to know specifics here. I guess this means the Bayou and Beerhive will not get the 2 new high-abv cans?

Tune into http://www.discovermoab.com for all the extras in a trip to Moab.

Yeah, I agree. Who gets to make these decisions?!! What possible criteria could guide them in this? Certainly not popular interest, because I sure could use some more variety in the liquor stores. I get tired of choosing from the same old thing.

The Governor is ultimately responsible for the DABC, send him a letter and fire him in November with your vote for Cooke.

Sending a letter to the Governor makes no sense. I don't think a general DABC call is super effective either. We need to let the specific person or people who decided this that there is demand. The problem may be poor sales of the 1 liter bottles from Moab- I'm not sure about this. The size and cost is a bit much for most of us. Either way, 16 ounce cans will sell!

I emailed the DABC - got this reply from Tony Gann in Purchasing:

Thanks for you inquiry. Moab Brewery just recently, on Sept. 20th, introduced these items to the UDABC. They requested new item codes which allows them to be sold from their package agency in Moab. These items have not yet been presented to the Department for listing in the State Liquor Stores. I have been in contact with Nina and Dawn at the brewery but am not sure at this point what their time frame is on submitting these 2 beers. I assure you we will move forward with the process once this has been done. In the mean time we do carry three of their other beers; Tripel Ale, Black Imperial IPA, and Scotch Ale.

Ben, way to get the wheels turning!


Is there a local SLC beer store that carries Moab's Black IPA?

Good job Ben! So they are saying they have not rejected Moab's new beers. Someone is wrong here. And to the question about the Black IIPA, I've seen it in Park City.