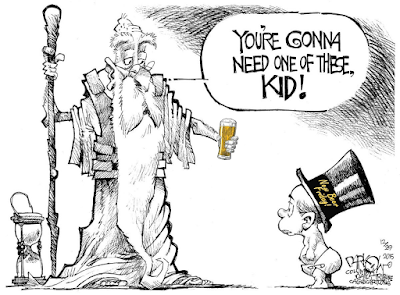 What a weird year 2017 has been, there's been no shortage of strange shit and many of us wondered if we were living in some kind of alternate reality. However, there was one thing that wasn't out of Bizzaro-Land; Utah had a record breaking year in regards to brewery expansion. 2017 saw the  addition of A.Fisher Brewing Co., the RoHa Brewing Project, RPM Brewing Co.and Kiitos Brewing Co. to our brewery count. As I see it, Utah now has 28 breweries (counting two independent brew houses for Roosters and Proper and three for the Wasatch/Squatters group). 2018 will likely see an additional three or four new breweries added to the roster. I don't have to tell you that a vibrant beer scene will help take Utah's beer culture out of the 1970's while greatly improve the outstanding local beverages we currently enjoy. Happy New Beer Friday and please have a happy and safe New Year!

Strap Tank Barrel Aged Stout: This is a barrel strength stout. Meaning it is not blended with a fresh batch of the base beer. This gives the beer more "umpf" and body. The beer is jet black, with a chocolate colored head. the nose has chocolate, booze, bitter coffee, woody highlights, and tangy cream sweetness. The flavors are rich and robust, with a smooth milk chocolate highlighted by campfire smoke. All of this on a bitter roasted coffee backbone, with woody and boozy highlights. Some crème notes, too. It has a rich, chocolate and vanilla aftertaste, with whiskey highlights in there, too. Smooth, slow finish, with a nice warmth and lingering chocolate. 9.6% ABV. Available for enjoyment at the brewery today. To-go sale coming next week. Congrats on UTah County's first barrel aged beer!

Avenues Proper Coffee Pale Ale:  Brewed with La Barba Ethiopian coffee beans and American hops. The idea here is to find a good combination of a fruit-forward coffee bean that wouldn't be overly acidic to pair with fruity American hops and bready malts to try and coax some flavors out of a coffee beer that you don't normally see. I havn't had a chance to try it yet but it sounds very intriguing. 4.0% ABV. Only at Avenues Proper.


Kiitos Wheat Ale: Kiitos is flexing a little muscle with this beer. Though it's only 4.0%
ABV, it's made using 75% wheat malt. If you've ever brewed with large amounts wheat and rye; you know it's a sticky mash. Kiitos' brew system allows them to utilize these water retaining grains with high efficiency. Basically, what I'm saying is that you won't find many 75% wheat beers in the market. This one is clean and bready with nice cereal and cracker qualities. Give this one a shot. Available at Kiitos.

Moab FMU Double IPA: Generally FMU means "Fuck Me UP" and while that may not be Moab Brewing Company's intent, it is becoming common vernacular in regards to high ABV beers. This Double IPA boasts a shload of throughout and packs a 9.6% ABV. I'd give this a rating of, "meh". This feels more like a thin barley wine. It's sweetness overpowers much of the hop profile, though it does finish quite bitter on the back of the tongue. Available at most DABC stores.

Oskar Blues Barrel Aged Ten Fiddy: Some bourbon, vanilla, oak, chocolate, caramel and a bit of coffee in the aroma. Lots of chocolate malts and some vanilla, caramel and coffee. Some roasted malts. The Bourbon isn't too overpowering. Smooth, silky texture. A very nice brew!
12.9% ABV. Available at your better beer bars.

Base Camp 5th Anniversary: This beer is basically an olde stock ale. It's kind of a baby barley wine. This was aged in multiple wine and "spirit" barrels. The malts are sweet and the barrel aging adds nice vinious tartness that is light and pleasant. It does feel a bit thin though. Non the less it's an enjoyable beer. I found it at Beer Bar. 7.9% ABV.

Stone Vengeful Spirit IPA: : A tropical and citrusy nose with mandarin orange, mango and pineapple along with malt. The taste is similar with orange and and mango off the top. The pineapple is a bit more restrained by the malts and the fruitiness as whole. pineapple. The finish is light and bitter. A nice and easy IPA with good fruit flavors and nice balance.7.3% ABV.

Deschutes Abyss - Tequila Barrel: The nose has a noticeable tequila that works well with the dark chocolate, coffee notes and licorice. I can't tell if I'm getting agave or not, but there is a vegital like sweetness off the top of the taste. This Abyss variant is a little lacking in the distinctiveness of the tequila barrel. And frankly I don't know if tequila is the best fit for an Imperial stout like this. What are your thoughts? 11.9% ABV. I found this at the Bayou.

Thanks to the Columbia Daily Tribune for letting me alter their cartoon.
Posted by Mikey at 4:46 AM